Rather than celebrate one Grain of the Month in April, we're saluting a whole category: sprouted grains. Sprouting whole grains adds surprising new dimensions of flavor and good health...

April’s Grain of the Month is not technically one grain, but a category of grains – sprouted grains – which are popping up on the scene more and more often. Sprouted grains are simply whole grain kernels that have begun to germinate, producing a tiny plant shoot. It’s this tiny change in the seed that produces large nutritional changes. 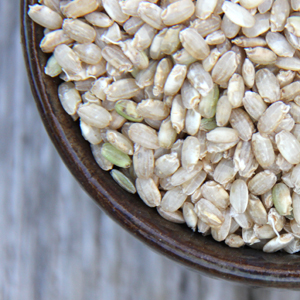 Supporters of sprouted grains argue that, in addition to all of the widely known health beneﬁts of whole grains, sprouted grains have the added beneﬁt of being more easily digestible. Our friends at To Your Health Sprouted Flour Co. state that, “when grains are sprouted they are converted into a living food with more vital nutrients which are more readily absorbed by the body. Sprouting also increases B vitamins in the grain, especially B1, 2, 3, and 5. Biotin, folic acid and vitamin C also increase. Sprouting also aids in the absorption of calcium, magnesium, iron, copper and zinc.”  Want to know more? Check out the many health studies on our website that explore the plusses of sprouted grains.

With all of these added beneﬁts, it’s no wonder that more and more manufacturers are trying their hands at sprouting grains. You can ﬁnd numerous products on the market now made with sprouted grain ﬂours, or buy intact sprouted grains from companies, including many Whole Grains Council member companies who are excited to be exploring this new territory.

But what if you want to take on the experiment yourself? Many people have taken to milling their own whole grain ﬂours at home, so why not sprouting? Although sprouting grains may seem like a straightforward process, it is in fact a ﬁckle practice. There is an art to the method, combining the right amounts of time, temperature, and moisture. If you are not careful, the grain can drown, ferment, or grow unsafe bacteria, or if left germinating for too long can begin to produce a new grass stalk, after which it loses its digestibility. But all of this doesn’t mean you shouldn’t give it a go! We recommend taking a look at the To Your Health How-To page to get started.

Below, we’ve included our favorite resources detailing sprouted grains and the best ways to use them. If sprouted grains are new to you, give them a shot using some of these tips and let us know what you think!