There's a New Quinoa in Town

It’s fluffy, white and mildly sweet, and delivers 7g each of protein and fiber. And it’s grown right here in the US.

It’s ﬂuﬀy, white and mildly sweet, and delivers 7g each of protein and ﬁber. And it’s grown right here in the US. Last year when they introduced their Organic Tri-Color Blend Quinoa, Lundberg Family Farms became the ﬁrst brand to oﬀer US-grown quinoa to a national market of consumers. This month, Lundberg’s new Organic Antique White Quinoa will join its Tri-Colored sibling on grocery store shelves around the country. 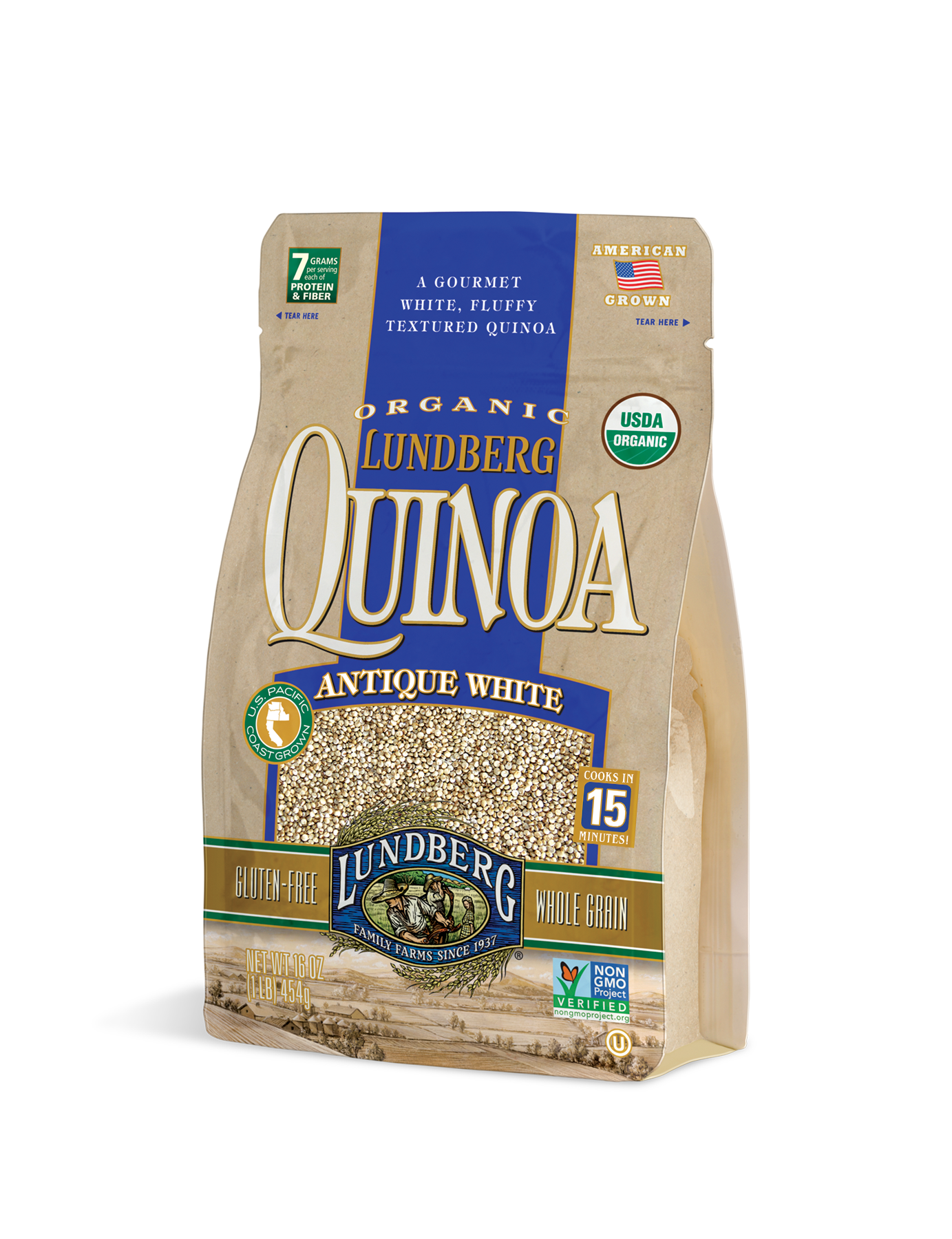 Quinoa has grabbed the whole-grain culinary spotlight over the past several years and it doesn’t seem to have any intention of losing its grip on our taste buds or our tummies. When Wendy’s and Chick-ﬁl-A start introducing quinoa dishes to their menus, you know that something big is going on. The United Nations declared 2013 the “International Year of Quinoa” because of quinoa’s outstanding nutrient density and the important role that this grain could play in reducing food insecurity, especially in arid regions of the world where agriculture is most vulnerable to the eﬀects of climate change. Quinoa is a highly resilient and adaptable species that can grow at sea level as well as at high elevations where other types of agriculture can be challenging. It is a non-irrigated, dry-climate crop that hydrates itself both by harvesting water via its root system and by extracting moisture from the atmosphere.

Until a few years ago quinoa was not produced at any large scale outside the mountains and coastal valley regions of Bolivia, Peru, Chile and Ecuador, but the plant grows wild all along the Paciﬁc side of the Americas, from Argentina up to Canada. Quinoa’s popularity boom over the past decade has caused demand to far exceed the yields coming out of the Andes region and consequently prices have skyrocketed, nearly tripling between 2006 and 2013.

It is in this context that Lundberg is entering the market – they see this as an opportunity to help increase supply so that the global price levels out and gains consistency. In their 2013 report, the UN pointed out that, “quinoa’s global success relies on making it aﬀordable” and that the agricultural and nutritional beneﬁts of the crop are only valuable if consumers have the ability to purchase it and farmers have a reason to grow it. The hope is that increasing quinoa’s availability and supply will prevent quinoa’s price from continuing to climb and allow this little nutrient powerhouse to graduate from a “specialty” grain to a commodity crop.

At our recent Whole Grains Away From Home conference, Mark DiDomenico from Datassential, a company that tracks trends on restaurant menus, said that quinoa’s menu penetration in the US has increased 33% in the last year. The grain is currently represented on 21.5% of all “fast casual” restaurant menus and on 17.5% of all ﬁne dining menus, which indicates how impressively widespread its demand has become. 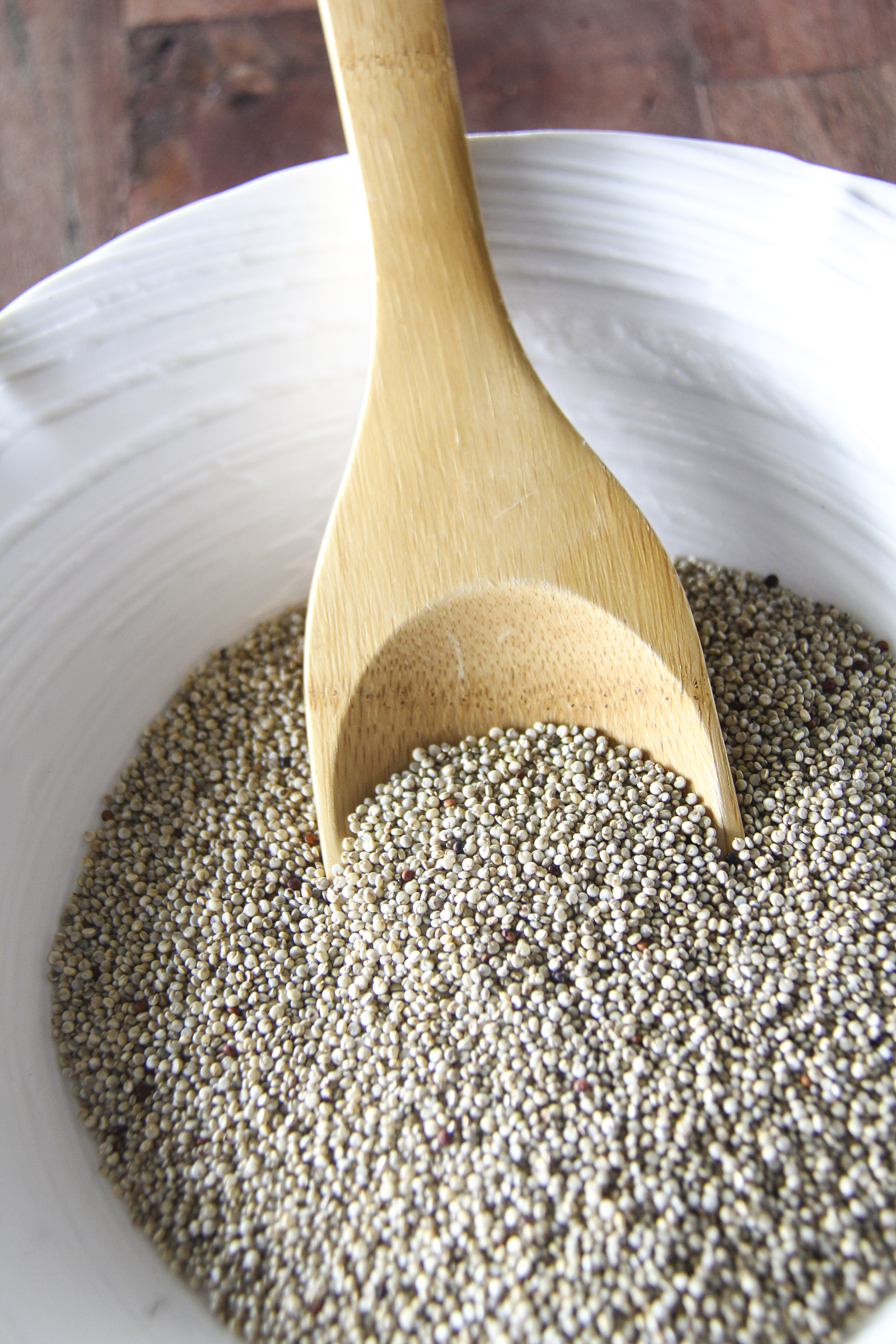 When Lundberg set out to select quinoa varieties for large-scale production, they turned to Dr. Kevin Murphy at Washington State University who had been running quinoa ﬁeld trials and conducting agronomics research on the crop for several years. They also partnered with farmers in the Paciﬁc Northwest who were already doing their own breeding experiments with the crop but who didn’t necessarily have access to larger retail opportunities beyond their local co-ops or farmers’ markets. With this wealth of academic and agricultural knowledge behind them, they embarked on a quest to identify varieties that would oﬀer both strong yields (delivering value to farmers) and high quality (delivering value to consumers). Todd Kluger, VP of Sales and Marketing for Lundberg, explained that “quality” in the world of quinoa includes not only taste and nutrient values (levels of ﬁber, carbohydrates, protein, etc) but also considerations of seed size, color, and texture after cooking.

Kluger says that Lundberg is very cognizant of quinoa’s presence in the American market as an import product with history and heritage behind it. “We respect that quinoa is perceived to have come from another part of the world and we are grateful to the people who have grown and cultivated it as part of their agricultural tradition, thereby preserving this grain’s lineage.”

Here at the Whole Grains Council, we see this as yet another sign of the enduring appeal of this protein- and ﬁber-rich grain and we are thrilled to watch its success. If you’re craving more quinoa on your dinner table, check out some of the great recipes on our site, like Chef Robin Asbell’s Pumpkin Quinoa Chili. (Caroline)

Mary Damiano
Good to hear. I enjoy Lundberg products now.
kelly-oldways
Yes, it's certainly an exciting time for USA grown grains!
Stevie Willett-Shaw
I already eat a lot of Lundberg organic products. If they can grow quinoa [and I like white and red] without resorting to GMO or depleting water, or using any chemicals, I'll be thrilled to buy it.
kelly-oldways
Hi Stevie, A lot of Lundberg's products are certified organic, which means that GMOs and synthetic pesticides are prohibited in production.
Kristin Carter
Lundberg Family Farms is one of the most amazing agricultural producers in our nation. They are a super company to work for and a great partner in the community. I applaud their investment in bringing quinoa to the US. This is a huge investment on their part with no guarantee of a viable return.