Barley – February Grain of the Month 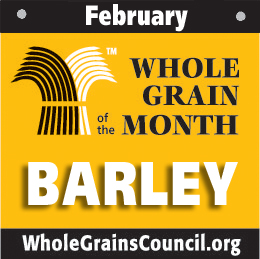 Barley is one of the world’s earliest cultivated grains, appearing in traditional diets across the globe. Once a food for gladiators and common men alike, today it is predominantly grown for animal feed and malt for use in alcoholic beverages. Barley, however, remains an important food crop in developing regions and places where other cereal grains cannot grow. With the climate changing and the importance of sustainability becoming more and more clear, barley’s resilience as a crop along with its host of health beneﬁts as a foodstuﬀ makes it an important example of a nutritious, dynamic crop that can thrive in less than ‘ideal’ conditions.

Cultivated barley, Hordeum vulgare, comes from the wild species Hordeum spontaneum. There are two groups of cultivated barley — two row barley and six row barley. Barley grains have an indigestible thick outer hull which must be very carefully removed to avoid losing some of the grain’s bran layer. Because of this, it is common for barley to be pearled or semi pearled, meaning all or some of the bran has been polished oﬀ. To avoid this diﬃculty in processing, hulless varieties of barley have been bred to have hulls that are so loosely attached that they generally fall oﬀ during harvesting. This cuts down on processing and ensures that all of the bran and germ are retained. To be sure you are getting whole barley, look for the 100% Whole Grain Stamp and barley labeled as whole, hulled, or hull-less, instead of pearled or semi pearled. Check out some photos of the diﬀerent types of barley here.

Barley grows well where other main cereal crops do not thrive due to altitude, low rainfall, or poor soil salinity. Barley’s tolerance is exempliﬁed by its impressive geographic range of cultivation, grown from Norway to Chile. The largest producers of barley from 2015-2017 were the  Russian Federation followed by France, Germany and Australia, a list that further exhibits barley’s dynamic growing capabilities. Barley ranks fourth in cereal crops production in the United States, behind corn, wheat, and rice. In 2012 around a quarter of barley was produced for malt, the majority of the remainder used for animal feed. 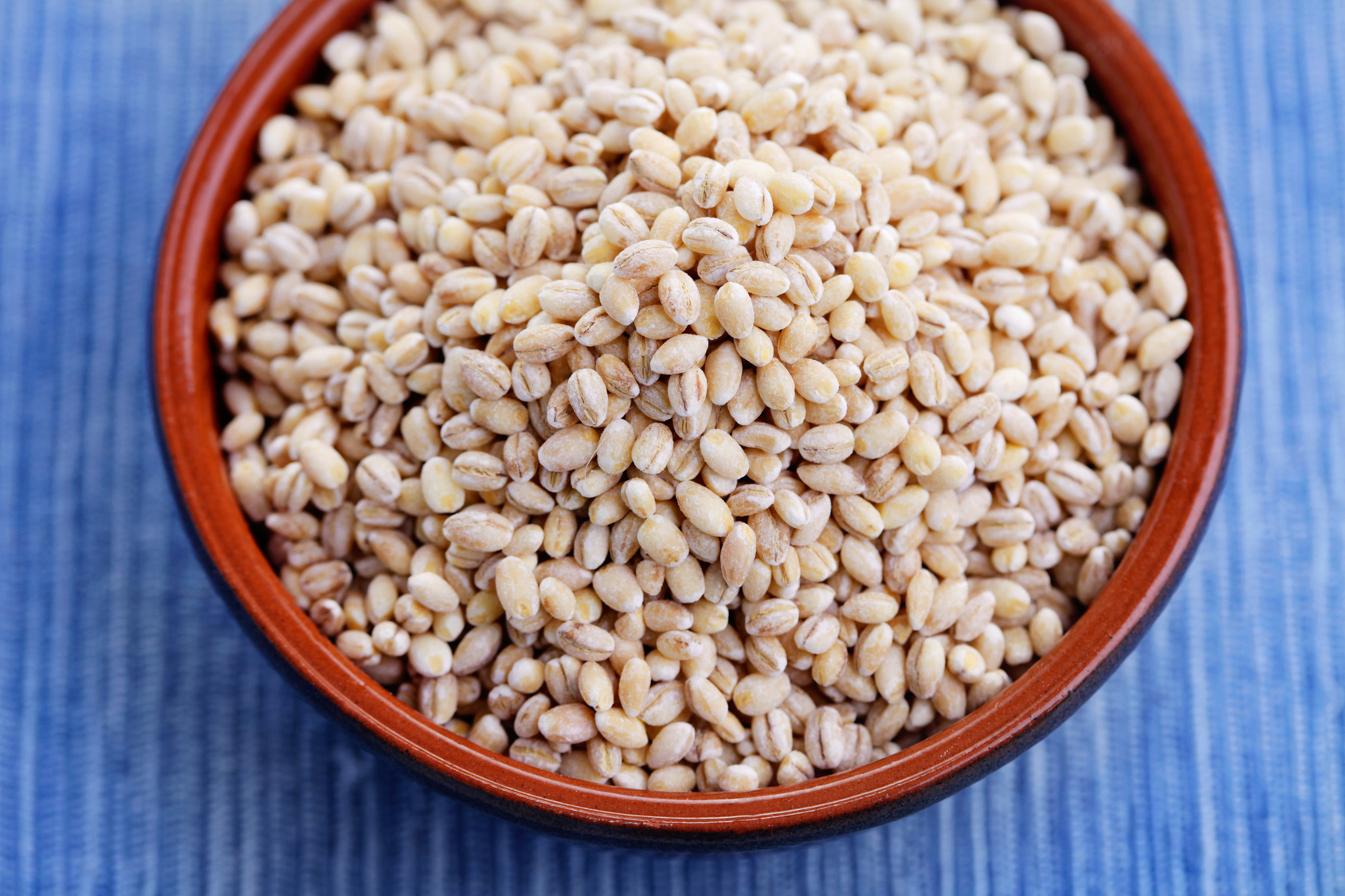 Barley is one of the world’s oldest cultivated crops, domesticated in Southwest Asia more than 10,000 years ago. Based on archeological ﬁnds, it is clear that barley was regularly cultivated along with other cereal grains emmer wheat and einkorn by 11000 to 10500 BP, often planted alongside legumes such as lentils and chickpeas. Though Southwest Asia is largely agreed upon as barleys point of domestication, it may not be the only one.  The genetic diversity between barley’s archaeological remnants in Southwest Asia and the Tibetan plateau has led many to believe Tibet to be a completely separate point of barley domestication.

Regardless of origin, barley quickly spread and became an important crop throughout Eurasia. Domesticated barley quickly traveled on from the Near East through East Central and South Asia and into Europe and Africa. Barley had rooted itself in Africa by 5000 BP, existing in Ethiopia for long enough that, although not an original cultivar, it has evolved distinct genetic diﬀerences from its Eurasian cousins. Barley continued to travel East by numerous diﬀerent routes, and by 2000 BCE barley had established itself across Europe.

Barley’s importance in Ancient life is evidenced in both the archaeological and written record. There are more barley remains in Mesopotamian sites than wheat, supporting the hypothesis that barley was food for the masses. In Ancient Sumeria, there was a god of barley but not of wheat. The Romans fed their gladiators barley, which some attributed to their strength calling the gladiators hordearii, or barley-men. Slowly, wheat gained an edge over barley and by the 1st century AD wheat had overtaken barley as the main cereal crop. Barley was relegated to mainly animal feed, though it remained an important food crop in Northern Europe until the 16th century. 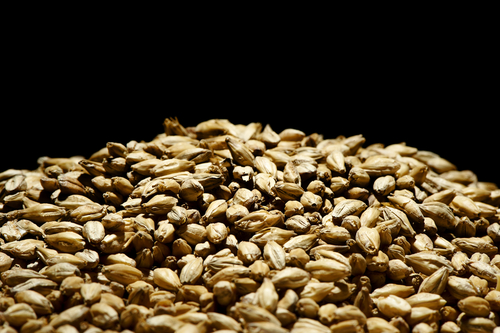 Barley traveled to the Americas by two distinct paths — to New England with Columbus and to the south with the Spanish Conquistadors in the 17th century. In the New World, barley was predominantly malted for use in alcoholic beverages. Barely is much better for malting than rye or wheat due to its inedible hardy outer hull. This substantial layer protects the germinating seed when malting, a process that includes the handling of grains at a high moisture content. Today, barley is still malted for use in beer and distilled spirits.

Barley is around 17% ﬁber, one of the highest levels in all whole cereal grains. It also contains high levels of soluble beta glucan ﬁber, a special type of ﬁber (also found in oats) that can help to control blood sugar and reduce the risk of heart disease. Barley has also been shown to reduce blood pressure and signiﬁcantly lower total cholesterol. In fact, the research supporting whole grain barley is so strong that in 2008 the FDA approved a qualiﬁed health claim for barley products, linking them to a reduced risk of coronary heart disease. 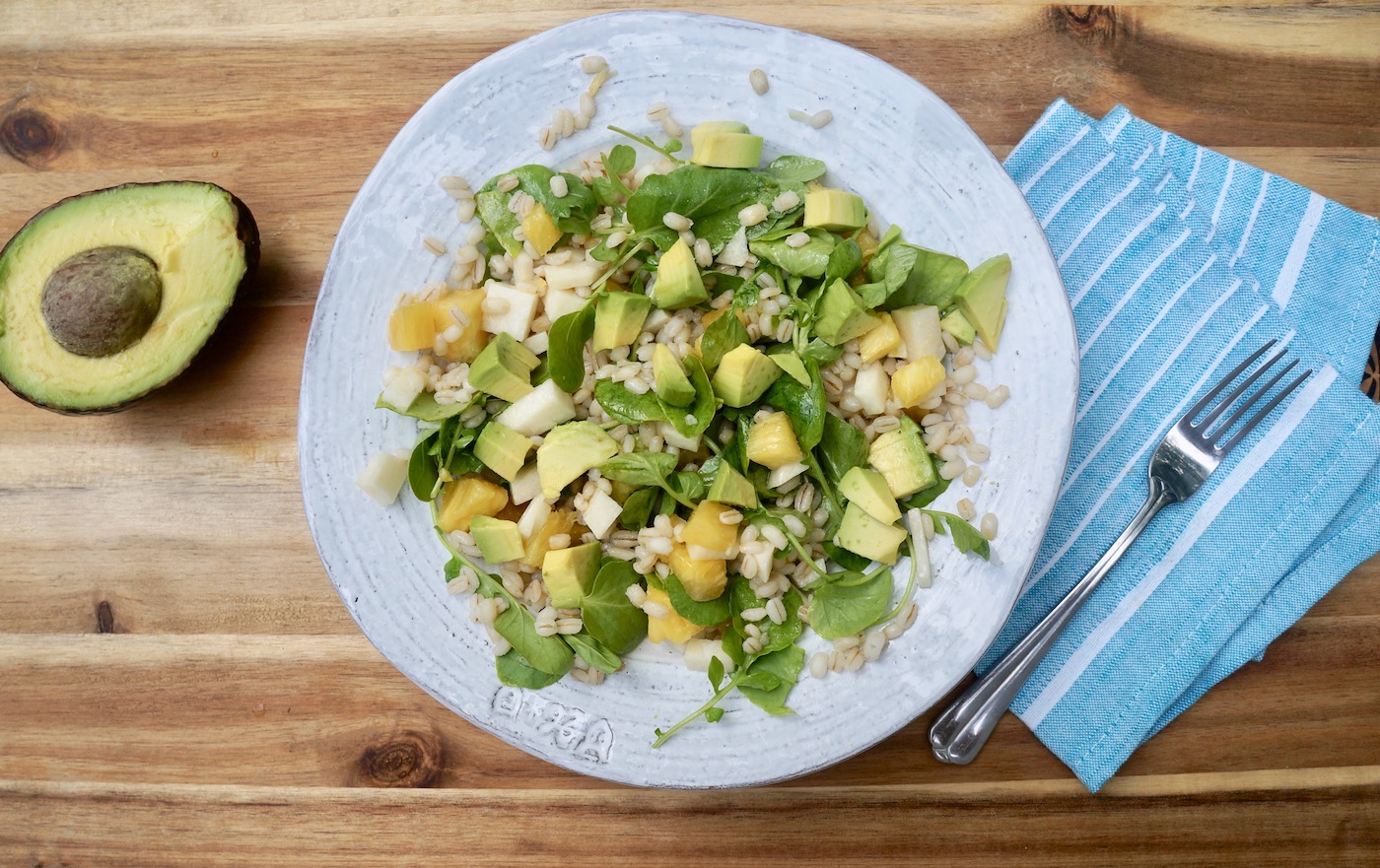 To cook whole grain barley, cook one cup of dried grain with 3 cups of liquid. Bring to a boil then simmer for 45 to 60 minutes yielding 3.5 cups of cooked grain. Some brands recommend soaking overnight to cut down on cooking time.

Barley is pleasantly ﬁrm and chewy, making it ideal for grain salads and pilafs and a superb substitute for rice especially in curries, stir fries, and risottos. Barley has a rich ﬂavor with mild sweetness, pairing well with mushrooms, root vegetables, warm spices and fall ﬂavors such as apples. One serving of cooked barley (¼ cup, uncooked) has 160 calories, 8 grams of ﬁber and 6 grams of protein.

Try out these barley recipes below!

Baked Chicken with Apples and Barley