Most Koreans, like their Asian neighbors, eat white rice as their everyday grain. Although white rice is sometimes mixed with other grains and beans to create an interesting grain-legume medley, brown rice is not commonly eaten.

That’s why my daughter Elizabeth was surprised, on her annual visit to Korea, to ﬁnd a new reﬁne-your-own-rice machine in the supermarket. She described it in an email from Korea like this:

Guess what I saw yesterday? The rice vampire machine. It was right in the middle of the EMart produce section. You put the whole rice in and it [reﬁnes the heck] out of it until it becomes white rice. Customers can say how many minutes they want to mill the rice. It has a handy chart explaining what percent of the nutrients are removed per minute, and examples of rice milled for diﬀerent amounts of time. It was doing a brisk business while I was there. Everyone wanted freshly milled, completely white rice. 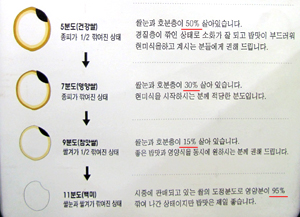 Even if you don’t read Korean you can see the percentages in the text (that’s the part I translated directly, without exaggerating.)

Well, at least it’s a start in helping Koreans contemplate the health beneﬁts of brown rice!