Antioxidants. We know they’re in fruits and vegetables, in our berries and olives, and in dark chocolate and tea. But most people are totally unware that antioxidants are abundant in whole grains, too! 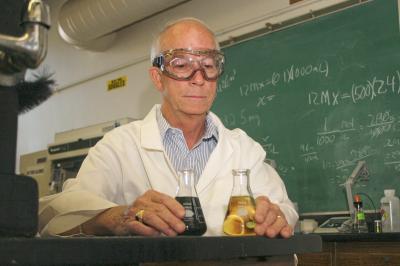 Polyphenols are credited for the role that fruits and vegetables play in reducing the risk of heart disease, cancer, and other diseases, in part by removing free radicals from the body before they can cause damage to cells and tissues. Polyphenols may be even more important than ﬁber in explaining the documented health beneﬁts of whole grains.

“Early researchers thought the ﬁber was the active ingredient for these beneﬁts in whole grains, the reason why they may reduce the risk of cancer and coronary heart disease,” said Dr. Vinson, the University of Scranton Chemistry Professor who headed up the study. “But recently, polyphenols emerged as potentially more important. Breakfast cereals, pasta, crackers, and salty snacks constitute over 66 percent of whole grain intake in the U.S. diet.”

Vinson went on to say, “We found that, in fact, whole grain products have comparable antioxidants per gram to fruits and vegetables.” (Vinson is pictured above, testing the antioxidant content of liquiﬁed whole grains.)

Vinson’s work reinforces that of WGC Scientiﬁc Advisor Rui Hai Liu, Ph.D., M.D., of Cornell, who ﬁrst published related research in 2002. Liu reported at a 2004 meeting of the American Institute of Cancer Research (AICR) that corn has almost twice the antioxidant activity of apples, while wheat and oats almost equal broccoli and spinach in antioxidant activity. Click here to download Liu’s charts. (Cindy)