Kara and Molli held the fort last week, while I vacationed in Rome. Well, that was the idea, but I can never resist checking out the whole grain scene even when I’m theoretically oﬀ the clock.

I was not expecting much in the way of whole grains. Last time I was in Italy, in November 2006 on an Oldways Symposium to Puglia, I found almost no whole grains anywhere. In fact, WGC member Tamma Industrie, whose factory I visited there, told me that in Italy at that time whole grain pasta was more usually sold in pharmacies, as it was considered more of a medicine than a food. 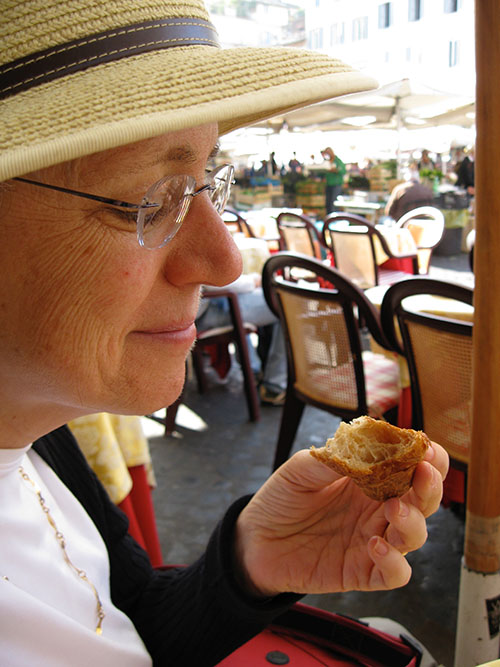 A recent four-country survey by HealthGrain in Europe, in fact, found that consumers in Finland, Germany and the UK were more likely to buy whole grain products if they displayed a health claim – but in Italy, the stronger the health claim, the less likely consumers were to purchase a whole grain food.

So I was delightfully surprised to ﬁnd that whole grains are now catching on in Italy at a fast pace. On our ﬁrst day there, I spotted a big “Pizza Integrale” sign on the wall of a bakery. On day two, we wandered into a caﬀé for coﬀee, and found that a whole wheat honey croissant (un cornetto integrale al miele) was standard fare. It was delectable and light (as the expression on my face, above, shows) and the woman at the counter told me it was 100% whole grain. I gave her one of our “Just Ask for Whole Grains” buttons, which totally mystiﬁed her.

Later in the week I scoped out a few supermarkets, and found quite a wealth of whole grain choices: breads, crackers, pasta – not just regular whole wheat but Kamut and buckwheat (saracen)— brown rice, biscotti, and cereals.

One cereal box even had all kinds of lets-learn-about-whole-grains games for kids on the back of the box. Based on all the great meals I had last week, I’m guessing that the Italians will quickly and easily rise to the challenge of making some of the best-tasting whole grains on the planet. (Cindy)

Jacob Litoff
From what I've learned 'whole grains' means grains that are in their whole state. Yes , unaltered in any way. So cracked wheat, bread, pancakes, croissants, those are not considered whole grains. Whole grain is brown rice, Millet, Buckwheat, amaranth, teff, and others but once they get ground up into flour they are not 'whole' grains anymore. They can still be good and healthy, but their best state is when they are 'whole'.
Cynthia
Whole grains that have been ground up are still considered whole grains (by the WGC, by the FDA, by the USDA, by leading nutrition scientists, etc.) just as an onion is still a vegetable even if you chop it up and cook it. If you prefer to eat your whole grains in their unaltered state, that's great. The research shows, however, that all whole grains contribute immensely to health.
Johnb528