January’s here again, bringing with it the anniversary of the Whole Grain Stamp. It was seven years ago this month that Oldways and the Whole Grains Council introduced this now-familiar packaging symbol.

January 2005 also marked the introduction of new Dietary Guidelines in the U.S. These Guidelines for the ﬁrst time urged Americans to “Make at least half your grains whole.” This was a much stronger recommendation than in the 2000 Guidelines, which simply advised consumers to “Choose a variety of grains daily, especially whole grains.”

Everything changed, that January seven years ago. First, the U.S. government came out with a much clearer and stronger rule. Then, less then two weeks later, we came out with a simple tool – the Whole Grain Stamp.

The combination of Rule + Tool made a big diﬀerence, according to a new report from the USDA’s Economic Research Service, published last month online in Applied Economic Perspectives and Policy. According to this report: 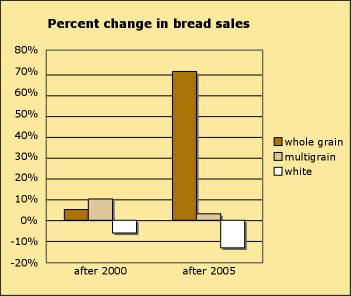 As you go down the bread aisle today, it’s almost hard to imagine that white bread made up 86% of sales in 1998-2000. Compare that to 2008, when Packaged Facts, a marketing company, asked people to say what kind(s) of bread they often eat – and whole wheat beat the pack: 52% said they often eat whole wheat, 43% said white, and 23% said multigrain.

Sales ﬁgures from Nielsen bear this out. In August 2010, for the ﬁrst time,  annual whole wheat bread sales outpaced white bread sales – at $2.6 billion vs $2.5 billion. Of course part of that was because whole grain breads often cost a bit more than white bread. Even looking at volume, however, whole grain was closing the gap. From August 2009 to August 2010, Americans bought 1.5 billion packages of white bread, and 1.3 billion packages of wheat.

Okay, enough numbers already. The simple take-away message? When government rules are augmented by useful tools adopted widely by both consumers and industry, positive changes can happen in our eating habits! (Cynthia)