As America’s kids head back to school, their lunch trays will include a lot more whole grain foods. New school nutrition requirements, which went in eﬀect July 1, 2012, say that at least half of grain foods served in schools must now be “whole grain-rich.”

That’s a good thing. Whole grain-rich basically means that 50% or more of the grain in a food is whole grain. While whole grains were previously encouraged, now they’re actually required. Many school districts had already been doing a good job of phasing in whole grains, as we’ve seen in some of the great creative entries in our annual Whole Grains Challenge award program. Other schools dragged their feet, sometimes from lack of knowledge, and other times from ﬁnancial constraints that prevented them from paying a few pennies extra for foods not yet mandated.

Both “veteran” school food directors experienced in whole grains and the “rookies” new to them are ﬁnding a shocking surprise as they plan their new menus, however: the new rules have both a minimum for whole grains served (good) and a maximum (not so good).

We’re all for portion control when it comes to kids’ meals; it’s important to ﬁght the rising tide of childhood obesity. The maximums turn out to be a bit unrealistic, though, on several scores. This is especially true at the elementary school level. Let’s take a look at two main problems:

1) Maximum is less than a sandwich a day
The grain requirement for elementary schools is 8 servings (minimum) to 9 servings (maximum). Not a lot of leeway there. A grain serving (or “ounce equivalent”) is the same as in the Dietary Guidelines: a slice of bread, a half cup of cooked pasta or rice, and so on. This means that you’d exceed the maximums if you gave each kid a sandwich (two slices of bread) each day, since that would result in 10 servings. Dana Woldow, at BeyondChron, recently wrote a wonderful blog discussing this problem.

2) Kids in Kindergarten to Grade 5 are lumped together
Five year olds have very diﬀerent needs from ﬁfth graders. According to the CDC, the average ﬁve year old weighs just under 47 pounds, while those ten year olds in ﬁfth grade average about 91 pounds – nearly twice as much! According to the Dietary Guidelines, ﬁve year old girls need 2 to 4 servings of grains each day, and ten year old boys need 3 to 6 servings – 50% more. But for the school rules, they’re all in one group, despite the much greater “fuel” needs of the older kids. 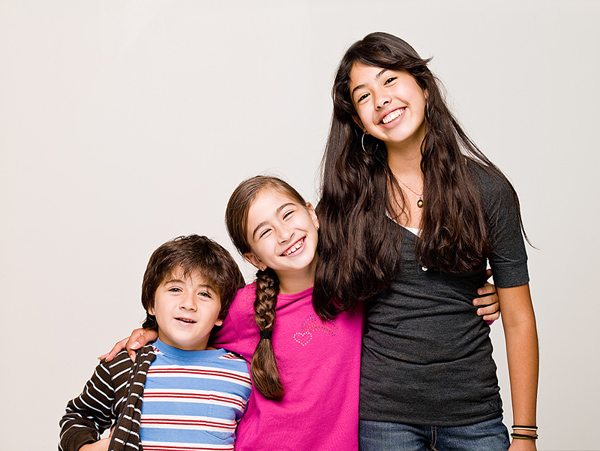 Should all three of these kids get the same servings of grains? (photo from Clipart.com)

School food directors and suppliers alike are saying, “HUH?” At the recent Whole Grains Summit I attended in Minneapolis, one school food provider said, “The new rules are causing us to reduce our whole grains by about 75% from what we were already oﬀering before.” A WGC member attending the School Nutrition Association show reported that the maximums were a hot topic. “They’re pushing whole grains oﬀ the menu. If you’re serving a whole grain pizza, you may be hesitant to oﬀer a whole grain salad in the salad bar.” Paperwork requirements for documenting what’s oﬀered are daunting, and the penalty for getting things wrong can be loss of reimbursement – so schools may err on the side of caution, and cut back the extra whole grains.

That would be a pity. Just when creative school food providers and suppliers have shown that kids can enjoy foods beyond pizza and burgers, we should be doing everything we can to expand opportunities to introduce children to a wide range of intact grains in pilafs, salads, and more.

There’s some indication that USDA is aware of the problem and changes may be considered down the line. It’s inevitable that any new road will have some speed bumps, and we applaud the hard work of everyone involved in creating and implementing the new school food rules.

Have your kids started school yet? What do they think of the new whole grain choices? Are you a supplier? How have the changes aﬀected you? Leave us a comment! (Cynthia)

lisa
That would be a pity. Just when creative school food providers and suppliers have shown that kids can enjoy foods beyond pizza and burgers, we should be doing everything we can to expand opportunities to introduce children to a wide range of intact grains in pilafs, salads, and more.
Caroline-WGC
Hi Lisa -- This blogpost was written in 2012 and a lot has changed since then when it comes to school lunch! And you're absolutely right that many school districts and food manufacturers have proven just how adventurous kids are. Unfortunately, the USDA's most recent move was to relax school nutrition standards, but you can read more about the latest in school lunch regulations, and the ways that many schools are remaining committed to prioritizing whole grain options here: https://wholegrainscouncil.org/blog/2018/12/face-relaxed-school-nutrition-standards-forward-thinking-schools-commit-prioritizing
Data Science Co...
Very truly said, things need to change.