Oatmeal Gets Gold Medal in Beijing

A study published in the August 2012 issue of Nutrition Journal shows that oatmeal beat out reﬁned wheat noodles for the gold medal in a head to head contest in Beijing. Oops – wrong Olympics; Beijing was four years ago. (And I’ll admit there isn’t any Olympic event for Best Grains – but hmmm…. maybe we can work on that for 2016.)

Anyway, here’s what happened. Scientists at China’s Institute of Nutrition and Food Safety Center for Disease Control and Prevention carried out a randomized controlled intervention with 166 men and women with high cholesterol. They divided these adults into two groups. Half the group consumed 100g of instant oatmeal daily for six weeks, while the other half consumed 100g of reﬁned wheat noodles – a normal daily staple in northern Chinese diets. Other than the oatmeal vs noodles diﬀerence, study participants continued to eat their normal diets.

I visited Beijing last year at the invitation of China’s PNDC (Center for Public Nutrition and Development), to help the Chinese run a conference on the importance of whole grains. (See earlier blog.) Of course I visited grocery stores while I was there, and was amused to see how oatmeal is marketed in Beijing – as a virtual superfood, but one probably best for those of us who are over the hill. 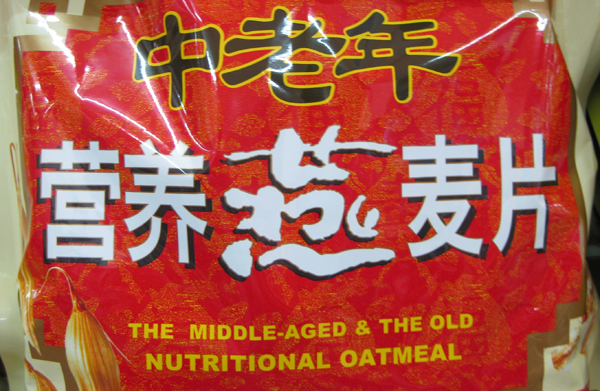 “The Middle-Aged & the Old Nutritional Oatmeal” said one package in English, under two rows of Chinese characters. “Choiceness Raw Material Best Enjoyment” said another, showing a middle-aged Chinese guy ﬂexing his biceps under a bowl of oatmeal. 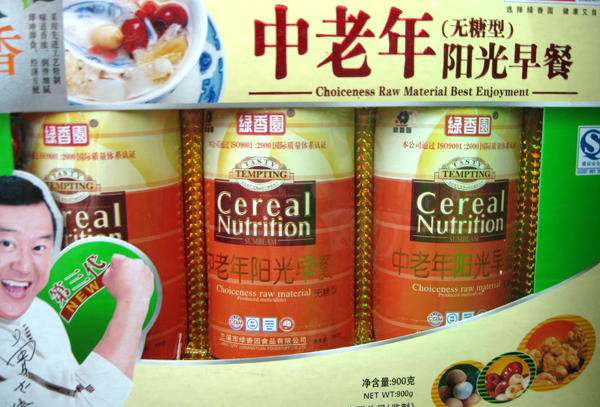 I saw package after package, many of which looked like high-end gourmet gifts rather than the simple cardboard tube we’re accustomed to here. Photos showed oatmeal with fruit, oatmeal with nuts, and even oatmeal with a nice raw egg on top. The English language slogans  – “Taste-tempting Best Enjoyment Good Taste Oatmeal” … “Win a High Reputation” … “Has a Long History” … “Series High Foodstuﬀ” – left me wondering what the heck the Chinese said! 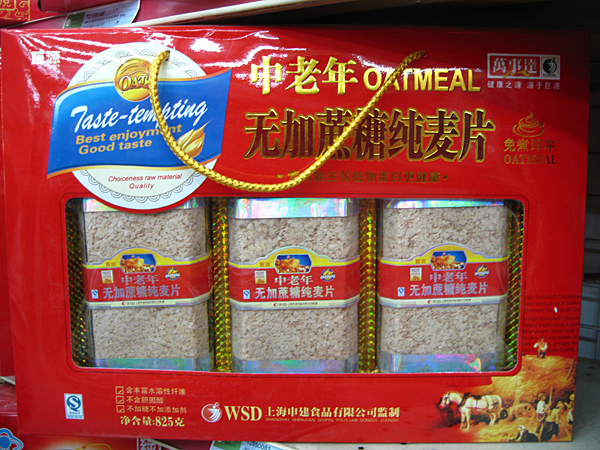 Were all these oatmeal packages new to the market in the last few years? The study that just appeared in Nutrition Journal was actually carried out in 2008, and had already been reported in Chinese-language journals before its recent translation in the Western press. We wonder, now, whether oatmeal only hit the shelves after that study ﬁrst saw the light of day!

It’s common in Asian countries for breakfast to center on congee, a thin grain gruel often made from white rice. It wouldn’t be too much of a stretch for the Chinese to switch their white rice congee to oatmeal, especially with support and encouragement from the government.

We met with Mr. Yu, our contact at the PNDC, at a recent conference in Minneapolis, to once again discuss ways that the Whole Grains Council can help the Chinese government promote whole grains. One suggestion from Mr Yu – once he learned that McDonald’s oatmeal sports the Whole Grain Stamp in the U.S. – was, “We hope you can talk to McDonald’s and convince them to sell oatmeal in China, too!” What do you think, McDonald’s? The Chinese deserve a break today, too – with oatmeal for lower cholesterol. (Cynthia)