Where is the Whole Wheat Pizza? 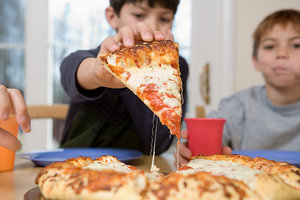 In this day and age, when the United States is home to more farmers markets than Burger Kings, it would surely be an anomaly to come across a bakery or sandwich shop that didn’t oﬀer at least one type of whole wheat or multigrain bread. Likewise, ordering Chinese take-out without having the option of brown rice is often met with equal parts surprise and disappointment.

However, there is one type of eatery where whole grains have been slow to join the party. And unfortunately, it’s home to one of America’s favorite foods. That’s right, I’m talking about pizza joints.

Sure, more and more pizza places sell pies with a choice of white or whole-wheat crust. California Pizza Kitchen and Uno Pizzeria & Grill are two big ones that come to mind (big kudos to them and to a few other chains listed on our website). But if you’re hoping to get a few whole-grain pizzas delivered this football season, you might be out of luck. That’s because many of the large national delivery chains are not yet on board.

Pizza is a popular item in school lunches, so companies have been working hard to develop great tasting slices that are whole-grain rich and lower in sodium to meet the new school lunch regulations. Domino’s oﬀers the “Smart Slice” for schools, with a crust  made with 51% white whole-wheat ﬂour. Similarly, Pizza Hut’s A+ Pizza program oﬀers a pizza with 51% whole-wheat crust. But these whole grain pizzas are exclusive to school lunch programs, and aren’t yet available for take-out or delivery nationwide.

Based on new research from the University of Minnesota, however, it looks like it’s time for chains to rethink that decision, as more and more people get on the whole grains bandwagon. In this newly published study, scientists conducted taste tests and studied plate waste data with kids in both school and restaurant settings. Not only did they ﬁnd that children consumed as much of the whole-grain pizza as the reﬁned-grain pizza, but they also discovered that liking ratings for the pizza did not diﬀer by crust type.

According to the USDA, “pizza is recognized as a high consumption food and a contributor of nutrients of public signiﬁcance in the American diet.” In fact, on any given day, 13% of Americans consume pizza. While some public health professionals might see that as a cause for panic, we at the Whole Grains Council see a huge, untapped opportunity to introduce whole grains into the diet. Indeed, based on the study described above, researchers concluded that “the impact on whole-grain intake could be substantial if large, national restaurant chains served pizza made with whole-grain crust.”

Better ingredients for better pizza? Only time will tell. (Kelly)

Anonymous
I remember a few years back, Papa John's had whole wheat pizza crust, and it was really good. They eventually discontinued it for some reason, probably because at the time, circa 2009-10, I'm guessing the demand wasn't there. I was bummed when they stopped offering it.
Cynthia

I agree, they may have tried it too early. I hope they give it another go, real soon!

Anonymous
I cannot understand why this is so rare here. I live in Toronto, and every major chain (the same ones that operate in USA) offers a 100% whole wheat or Multigrain option (which is more than 65% whole wheat). As a diabetic (and I know it is not a rare disease), I find whole wheat crust lets me enjoy a slice or two without giving me a glucose high. Since there are over 30 million diabetics in the USA, I would have thought this was a great marketing opportunity for any chain to target this segment.
Kal
Your comments are right on the button
Peggy
We used to get Papa John's wheat crust pizza, I just called to see if they started using it again and was told no. If I can find a place that does have wheat crust, it will definitely be the only place we will go. Makes no sense to me.
Cynthia

Don't give up! Check out our list of restauraunts serving whole grains. There ARE some whole grain pizza crusts out there. http://wholegrainscouncil.org/find-whole-grains/chain-restaurants

Jonathan
I am trying to eat healthier, but I love pizza. I would appreciate the option of a 100% whole grain pizza crust. I know someone can make it delicious.
Caroline-WGC
Be sure to check out this list of chain restaurants with whole grain offerings on their menus (including pizza): http://wholegrainscouncil.org/find-whole-grains/eating-away-home/chain-restaurants. Or, if you like to cook, try using our Whole Wheat Cornmeal Pizza Crust recipe: http://wholegrainscouncil.org/recipes/whole-wheat-cornmeal-pizza-crust.
David Eldredge
Papa Murphy's also did about 10 years ago... I put in a request for it, (sure I wasn't the only one) but a bit later it was offered. They should have used whole white wheat or a lower percentage of whole wheat. It did not last that long and it was not too tasty. I wish they would try again with a better ratio or better tasting wheat.
cpkuser
The whole wheat crust at California Pizza Kitchen is gone after being on the menu for almost 30 years! This is TERRIBLE. Bring it back. The new Cauliflower crust has cheese in in. This is awful.
January 18, 2019
This time and day, all restaurants should use whole grain or wheat. There are sooooo many health issues that whole foods should be manatory.
Tyler
In 2014, I worked for Papa John's distribution in Louisville, Kentucky, and we would make limited amounts of whole wheat crust, so it is available, but at specific locations! Maybe, central customer service would be able to pass along which stores offer it!
Jonnie
There is a chain called Brixx in NC...they offer whole wheat pizza crust. It's pretty good...kinda pricey though.
Bethany Silva
My understanding is that whole wheat and multigrain are more perishable so the incentive is to not carry them. I have gone through 4-5 pizza places that launched a healthier crust, but then a year or two later no longer carry it. This is disappointing because I feel if more people were requesting and ordering them then they'd all be providing a healthier crust. Supply and demand I guess.
Dr. (not phd dr...
I just researched & Buddy's Pizza site claimed they have available multigrain, wheat crust* So when times, cravings, urge & financially speaking, I will place an order* We are what we consume*
JimTitus
In the Washington DC area, there is a chain called spice 6 which is essentially in Indian food equivalent to chipotle. You can buy a pizza on whole wheat nan there. Indian restaurants are not going to stop making whole wheat nan, and Indian restaurants that also sell pizza will probably keep selling pizza, so there is a fair chance that this option will remain sustainable. Otherwise, people who care about nutrition generally avoid pizza, and people who eat pizza generally don’t care or even know what’s healthy, so the fit between whole wheat and pizza is not great.