Does Anyone Know What Gluten Is? 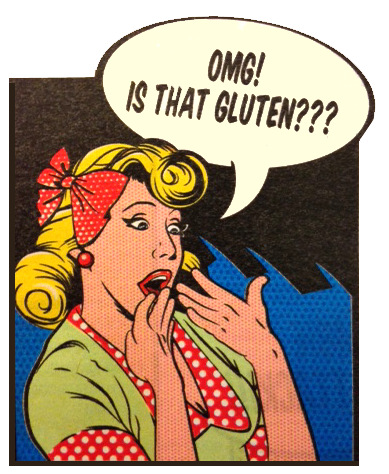 Gluten is a mix of two proteins found in barley, rye, wheat and triticale (a wheat-rye hybrid). Wonderfully elastic, gluten makes it possible for dough to stretch and rise in the oven, creating crusty, delicious loaves of bread.

For thousands of years, bread has been considered the staﬀ of life – until now, when misunderstandings about gluten have caused many people to mistrust even the heartiest loaf of artisan bread, as this illustration from Parade Magazine shows. (In the article, which was about “moral panics,” Parade suggested people should be afraid of not getting enough ﬁber if they skip whole grains, rather than fearing gluten.)

Other pushback came this week from NPR’s show On the Media, which examined diet fads, with gluten as the prime example. One of their conclusions: “Going gluten-free is celebrity-induced folly. Unless, of course, you have actually been diagnosed with celiac disease.”

How rampant is misinformation about gluten? An NSF International phone survey of 1,012 adults in May 2015 found the following:

5% think gluten is found in all carbohydrates
These folks are probably unaware that fruits and vegetables are also carbohydrates. Folks with celiac disease would starve if all carbs were oﬀ-limits in a gluten-free diet!

26% think gluten is only found in wheat
While those answering the question above overestimated the presence of gluten, about a quarter of respondents underestimated its presence, saying that anything wheat-free would deﬁnitely be gluten-free.

Comedian Jimmy Kimmel explored this same topic – misunderstanding of gluten – last year, when he did on-the-street interviews asking folks following a gluten-free diet “What is Gluten?” As you can see on YouTube, no one really understood.

Consumer Reports tried its own survey, which it published in January 2015 in an article called “6 Truths about a Gluten Free Diet.” Among CR’s ﬁndings:

63% think that a gluten free diet would improve health
Supposed beneﬁts (according to those questioned) included digestion, gastrointestinal function, weight loss, increased energy, lower cholesterol, and a stronger immune system – all unfounded for the general public, according to Dr. Alessio Fasano, interviewed in the article (and a speaker at our recent conference).

A report from Ardent Mills, titled “The Truth about Gluten Free” found that people talk about avoiding gluten, but perhaps because of their widespread lack of understanding of the terms gluten and gluten-free, “something unexpected was uncovered: … avoiding gluten does not mean buying gluten-free products.” By studying sales data, Ardent found that:

Want to see how your understanding of gluten stacks up? Take this quiz on the WebMD site. (Cynthia)

Noah
What is the disease that is an autoimmune form of gluten intolerance, which requires that suffers must eat a gluten-free diet for life?
Caroline-WGC
Hi Noah -- The autoimmune disease you're describing is called Celiac Disease, which affects about 1% of the population.