80-85% of the world’s plant-based food supply comes from annual plants, that have to be grown from scratch every year. Experts worldwide think perennial grains, with long, drought-resistant roots, make more sense in a time of climate change. 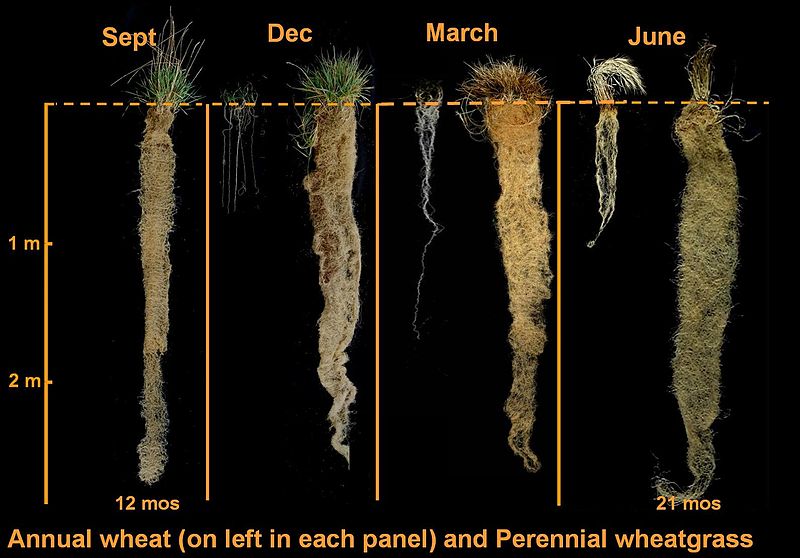 80-85% of the world’s plant-based food supply comes from annual plants. Every year, farmers clear their land of competing weeds, sow seeds, grow crops, harvest them – then start all over from scratch the following year. Year in and year out, herbicides are piled on to remove the weeds, irrigation is needed to sustain crops with shallow roots, and valuable topsoil is lost as the ﬁelds are tilled and as they lie empty.

Wouldn’t feeding the world’s population be easier if key crops were perennials that could stay in the ground for many years, sending down long drought-resistant roots that would anchor and replenish the soil? Most of the trees, bushes and grasses in our backyards are already perennials, after all, as are a few of our food crops – including olive and fruit trees, grapes, and asparagus. What would it take to tip the balance more in the direction of perennials? 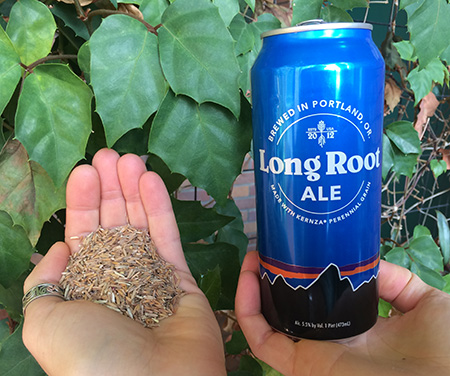 For four decades, a Kansas-based organization called the Land Institute has been doing just that: working hard to “perennialize” wheat and other staple crops. Working with collaborating researchers throughout North America and in South America, Asia, Europe, Africa and Australia, the Land Institute uses traditional (non-GMO) selection and inter-mating techniques to increase yield and disease resistance in naturally-perennial crops, and to create perennial versions of annual crops.

Now, one of the Land Institute’s most promising projects – Kernza®, a cousin of annual wheat – is showing up on plates in top restaurants and even in Patagonia’s aptly-named Long Root Ale. Here are a few other places Kernza is making its debut:

Kernza’s success still hangs in the balance. Breeding eﬀorts continue, as the perennial wheat still produces a much smaller kernel, and fewer bushels per acre. And even when all the kinks are worked out, companies like General Mills will need to convince farmers to take up the crop before they can begin to ﬁll demand for an industrial-scale product. Changing the food supply involves a whole lot more than just turning a spigot somewhere. That said, Kernza’s progress to date serves as an inspiring example of how researchers, restaurants and food companies can work together for the greater long-term good of our planet.

For grain lovers, the Land Institute’s work doesn’t end with Kernza. They’re also working on creating perennial varieties of sorghum and rice that will hopefully be part of our future grain-bowls. If you’re as excited as we are about the move toward perennial food crops, you can learn more about Kernza and the eﬀorts of the Land Institute in recent articles in The Nation and in the Washington Post or visit the Perennials Grains website maintained by a community of people interested in the topic.

Write and tell us if you’ve spotted Kernza in a food or drink near you! (Cynthia)