With a rich, earthy and nutty flavor, and a texture much like couscous, fonio is prized for its distinctive taste. 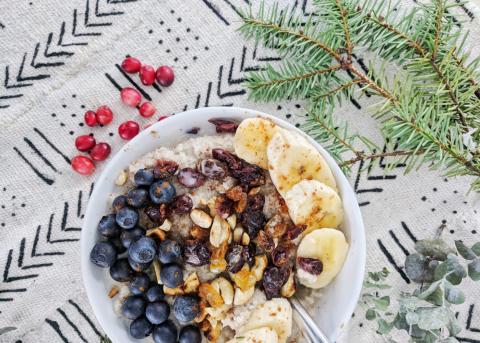 You love teﬀ, you’re an einkorn enthusiast, millet makes regular appearances on your plate, and you regularly expose your friends to grain dishes they’ve never encountered before. We get it. We’re total grain-iacs too.

That’s why we think you’re going to want to hear about fonio, the grain that some are calling the “next quinoa”, if you haven’t already.

Fonio is an ancient grain—in fact, having been cultivated for more than 5,000 years, it may be Africa’s oldest cultivated cereal crop. Archeologists have found fonio buried in tombs inside the Egyptian pyramids, indicating its importance in the cuisine going back centuries. Today, this species of millet is grown throughout many parts of Western Africa including Senegal, Mali, Burkina Faso, Nigeria and Chad.

As a grain that is both highly resistant to drought conditions, and extremely fast-growing (producing grain within just 6-8 weeks of being planted), it’s very well-suited for climate change resiliency. Fonio is often grown in low-quality, sandy soils where other crops are unable to thrive. Like all whole grains, it’s highly nutritious, but it sets itself apart from the others by boasting signiﬁcant amounts of methionine and cystine, amino acids that are largely deﬁcient in most major cereal crops.

In an interview with Oldways, New York City chef Pierre Thiam (who grew up in Senegal) shared with us an old Bambara saying: “Fonio never embarrasses the cook.” With a rich, earthy and nutty ﬂavor, and a texture much like couscous, fonio is prized for its distinctive taste. In Senegal, it is sometimes called “food for royalty” and is served to guests of honor. Thiam has spent many years now introducing Americans to ﬂavors from his native cuisine, and he’s become extremely passionate about fonio in particular.

In an eﬀort to make fonio more readily available in the US, Thiam recently co-founded a company called Yolélé Foods that aims to grow the American market for fonio while improving the economy for smallholder farmers in Senegal. By partnering with NGOs in Senegal to train farmers on eﬃcient growing practices, Yolélé Foods aims to increase yields, reduce input costs, and expand the supply of fonio at a rate that keeps up with growing demand. Doing this successfully will help the market for fonio avoid the economic boom-and-bust issues that quinoa experienced as demand exploded, outpacing supply. Creating steadier economic growth should serve to provide an increasingly stable income for Senegalese farmers.

Recently, the program manager of our African Heritage & Health program had the opportunity to speak with Thiam about his new cookbook and the work he’s doing to grow the fonio market. You can read more about their conversation on our Oldways blog. If you’re interested in learning more about African heritage cuisine, or attending a cooking class near you, check out our page about A Taste of African Heritage. (Caroline)

Verity Grace Turner
Hi! Can one get seeds in South Africa, or buy it commercially?
Caroline-WGC
Hi Verity -- If you're interested in sourcing fonio seeds that you could plant, I'd suggest reaching out to an agricultural or farming organization in Senegal. Yolele Foods has started selling their fonio product on Amazon, so if you're looking to cook the grain at home, you may be able to order it through their website. You could also try reaching out to Yolele Foods directly for more information about where it's available: http://yolelefoods.com/contact/
Will Carlton
I also would like to discuss growing fonio in the US and Africa. My family has grown grains in Montana for 4 generations and I have the land to start with. My focus is the integration of healthy diet with trauma recovery in a Biblical/community context.
Caroline-WGC
Hi Will -- We're not aware of anyone growing fonio in the US yet, but please keep us posted if you give it a try!