Amaranth - May Grain of the Month

May’s Grain of the Month, the pseudocereal Amaranth, makes up for what it lacks in size and perhaps recognition by packing a nutritional punch. Mentioned in Aesop’s fables and Milton’s Paradise Lost and sometimes called the “food of immortality” by the Aztecs, this resilient and visually striking plant has recently gained popularity in the health food scene and is ready to retake the spotlight.

The genus Amaranthus contains upwards of 70 species of plants and can be found on every continent, though most species are considered weeds. Only a dozen or so of the Amaranthus species have been cultivated by humans, selected either for their seed head or large leafy greens. Three species have been domesticated for their large seed heads: A. cruentus and A. hypochondriacus are indigenous to Mexico and Central America, and A. caudatus is indigenous to the South American Andes. Leafy species such as A. blitum, A. spinosous, and A. tricolor are grown for their broad leaves and consumed as a nutritious vegetable in China, Southeast Asia, Southern India, West Africa and Caribbean basin. With striking stalks, broad leaves and impressively bright purple, red, or gold ﬂowers, amaranth is also often grown for ornamental purposes.  Click here to “meet” amaranth in its various forms. 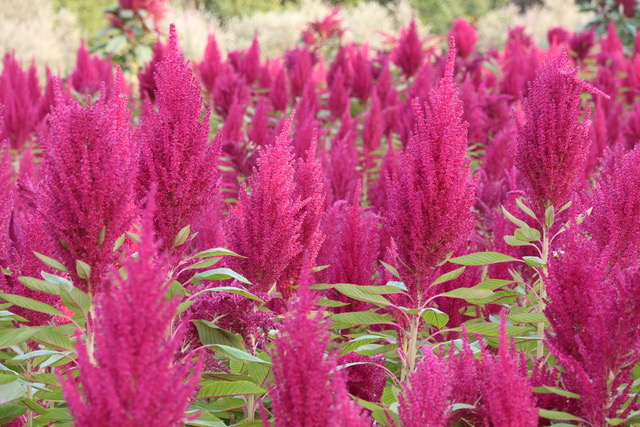 The three species of amaranth cultivated for their grain production – A. cruentus, A. hypochondriacus, and A. caudatus – are not true cereal grains. Amaranth is one of the six pseudocereals that are considered whole grains despite not being part of the Poaceae cereal family. Though botanically distinct, pseudocereals are generally treated as cereal grains because they are so similar nutritionally and are used culinarily like other cereal grains. Amaranth is a stately, impressive plant and can reach up to 9 feet in height. Its grain heads are just as impressive, and capable of producing large yields similar to that of corn despite the tiny size of the amaranth seeds themselves, which are only about a millimeter in diameter. Amaranth is a C4 plant and therefore eﬃcient at ﬁxing carbon in high-temperature and low-moisture environments allowing it to adapt to a wide range of growing conditions and do well in a variety of elevations. This resilience has renewed scientiﬁc interest in this marginal crop as the earth warms and the population continues to grow. Amaranth produces both light and dark seeds, though the light-colored grains are selected for sowing most often due to their ﬂavor and popping capabilities – a favored mode of preparation. If left to its own devices, as when grown as ornamentals or for dye, the dark seed form will gradually become predominant.

Amaranth seeds have been found at mid Holocene era archaeological sites in northern Argentina, dating back 8,000 to 7,000 years ago. The archeological record indicates that A. cruentas is the original cultivar, domesticated close to 6000 years ago.  Examples of the pale form of A cruentas have been found in the caves at Tehuacan Puebla in Mexico, an early agricultural site, dating from around 4000 BC. It is believed the seeds migrated to Tehuacan from their original domestication point elsewhere. Though hard to track the exact beginnings of amaranth cultivation, its inﬂuence in pre-European Central and South America is abundantly clear.  Historic records document amaranth across regions of Central America, and into the southwestern part of North America. Amaranth has been found in Ozark rock shelters dated from 1100 AD, and colonial explorers from the mid-19th century documented obtaining amaranth seeds from the indigenous tribes along the Colorado River in what is now Arizona and Utah.

The most robust record of amaranth comes from the Aztec empire, which dominated central Mexico in the 15th and 16th centuries AD. Amaranth was one of the three major crops collected, along with maize and beans, as tribute from the 17 provinces that made up the Empire. The historical records show that much of the amaranth collected was used for ceremonial purposes, unlike maize and beans which were largely collected for consumption. An oft noted ceremony is one honoring the god of war — Huitzlipochtli. The deity’s image was created from a combination of amaranth grains and honey, and after much celebration culminating in human sacriﬁce the image of the god was broken into pieces and distributed to the people to eat. Sweet snacks made from popped amaranth mixed with a binding agent such as honey are still a popular way of consuming amaranth in Central and South America today. 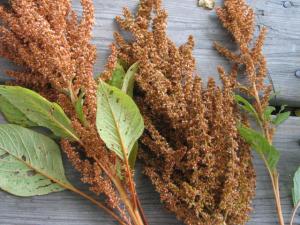 Amaranth is also very present to the archeological and historic record in Southeast Asia and China. Amaranth seeds found in Uttar Pradesh date back to 1000 BC. Consensus has not been reached whether amaranth has two distinct origins – in Asia and the Americas – or if all amaranth originates from the Americas. Studies show that Asian examples of amaranth mirror the American, or ‘new world’, species extraordinarily closely. This, coupled with the lack of variety in early examples of Asian amaranth compared to the diverse range of amaranth in the Americas has led many to believe all amaranth originated from the New World. Bolstering this belief is the changing opinion of historians and archaeologists when considering the possibility of trans- or peri-oceanic sea voyages in the pre-Columbian age. In fact, the presence of amaranth in ancient Southern India and China is used as evidence supporting the growing opinion that transoceanic trading routes in pre-Columbian times is not as far-fetched an idea as many, perhaps somewhat politically, believed in the early- and mid-20th century.

With the invasion of Central and South America by the Spanish in the 16th century, the production of grain amaranth dwindled in the Americas. It never quite took root as a grain cultivar in Europe, though it spread quickly through Africa where, much like in parts of Asia and the Caribbean, it remains a popular leafy green to this day. As it did with many ancient grains, the American health movement of the 1970s brought renewed attention to the crop, and the market for amaranth continues to grow, especially in light of renewed interest in plant-based diets and sustainable agriculture. Amaranth’s use in food products is varied. It is used in its intact form, as a ﬂour, and increasingly as a puﬀed or popped component of cereals and granola bars. Amaranth’s high nutrient content, drought tolerance and extremely low water requirements has sparked more research into breeding and growing the crop, as farmers facing the challenges of climate change have begun seeking crops that are more resilient and adaptable. 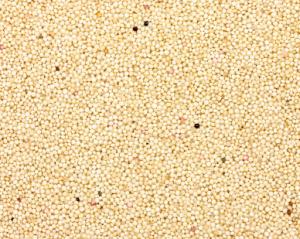 Amaranth boasts an impressive nutrient resume, and like other pseudocereals, is a protein powerhouse. It is a complete protein, containing all nine essential amino acids, and at 14% protein, it contains close to double the amount found in rice and corn. In fact, researchers in Guatemala found it to be one of the most nutritious plant-based proteins. The beneﬁts of amaranth’s protein do not stop there – amaranth also contains lunasin, a peptide believed to have anti-inﬂammatory and cancer-preventive beneﬁts. If you have celiac disease, remember amaranth is one of many great gluten free grain options!

To cook amaranth, combine one cup of dried grain with 2 cups of liquid. Bring to a boil then simmer for 15 to 20 minutes yielding 2.5 cups of cooked grain. 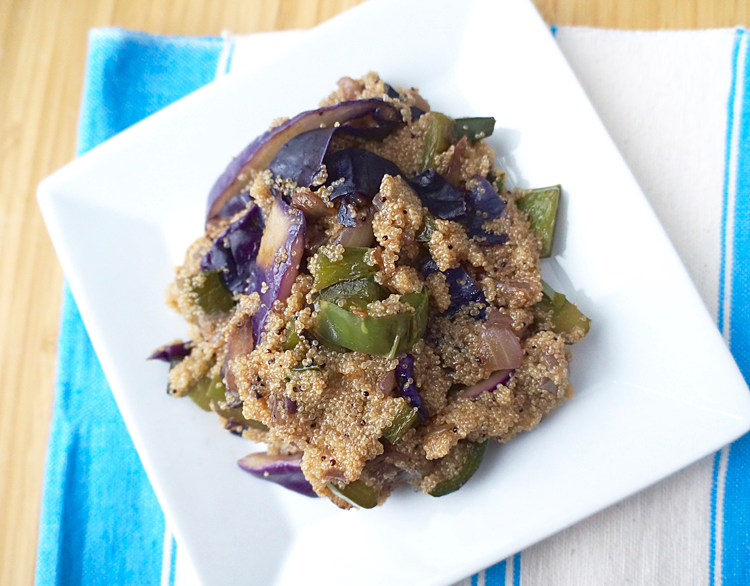 Amaranth is great in porridge or polenta style recipes. It can also be popped like popcorn! Amaranth has a peppery taste with a pleasantly sweet, grassy aroma. It pairs well with squash, corn, sesame, cinnamon, vanilla, and chocolate.

One serving of cooked amaranth (¼ cup, uncooked) has 180 calories, 3 grams of ﬁber and 7 grams of protein.

Try out the amaranth recipes below!

Amaranth with Peppers and Cabbage