This month we celebrate rye and its half sibling triticale. Perhaps better known for its use in whiskeys and by deli counters in the United States, rye has long played an important role in colder temperate countries where it was too cold or wet for wheat to grow dependably. Rye is an important component of heritage diets in these areas, used as a key ingredient in the fragrant, dense, and nutritious loaves celebrated in these regions. Much like other whole grains and whole grain ﬂours, rye – and especially its use in bread – fell out of favor when reﬁned white ﬂour and white bread became more aﬀordable and accessible in the late 19th century. In more recent years, rye’s many stellar qualities, both as a crop and as a food stuﬀ, have created a ‘rye’surgence of sorts, inspiring a wider appreciation for what was once known as a ‘peasant grain’.

Cultivated rye (Secale cereale L.) is related to both common wheat and barley. It is rye’s hardy nature that eventually led to its cultivation, from a weed found sprouting in wheat and barley ﬁelds, to an essential nutrient source for those living in cold, damp environments where other cereal crops failed to thrive. In the late 19th century Alexander Wilson, a Scottish scientist, attempted to crossbreed rye and wheat hoping to produce a grain with many of the advantages of wheat but with rye’s ability to thrive in adverse conditions. The resulting plant, triticale [Triticosecale rimpaui], though sterile, was the ﬁrst instance an agricultural crop species was produced, scientiﬁcally, by humans. Only a few years later, in 1888, German botanists successfully produced a fertile hybrid of rye and wheat, creating the triticale known today. Although great hopes were entertained for triticale, it has been slow to ﬁnd widespread commercial acceptance or demand especially as a human food stuﬀ. Most of the triticale grown in the United States is grown as silage for animal feed, providing a good source of protein, amino acids, and B vitamins.

Click here to see photos of diﬀerent types of rye and learn more.

Rye, on the other hand, does not have so clear an origin story. Although rye grains have been found in early Neolithic sites, it is controversial whether these examples are wild strains or evidence of a domesticated crop.

Wild rye shows up in the archaeological record in modern-day Turkey along with its cousins wheat and barley, from sites dated as early as 11,700 years ago. In these archeological sites, rye grains are present in very small numbers indicating they are likely wild strains of rye, which grow in the area. At Abu Hureya, however, a Pleistocene settlement in Northern Syria, there is controversy over whether the rye grains found are a wild or domesticated form of the cereal crop. If domesticated, this would push our current understanding of the cultivation of cereals back from approximately 11-12,000 years ago to 13,000 years ago, with rye, not wheat or barley, as the primary crop of agricultural development. This totally upends our current understanding of cereal cultivation. The ﬁndings from Abu Hureya quickly lead to criticism, however, surrounding the dating methods used and whether the rye grains themselves were wild or not. Regardless, due to the remains gathered from Abu Hureya, some hypothesize that rye was the ﬁrst cereal cultivated by humans during the end of the last ice age. The theory goes that when climate change forced some of these ﬁrst cultivators to become hunter-gatherers again, rye was left to fall back into its wild and weedy ways. By the time the climate was once again conducive to agriculture the variables had changed, now lending themselves to the cultivation of wheat and barley which is where our current understanding of cereal cultivation begins. 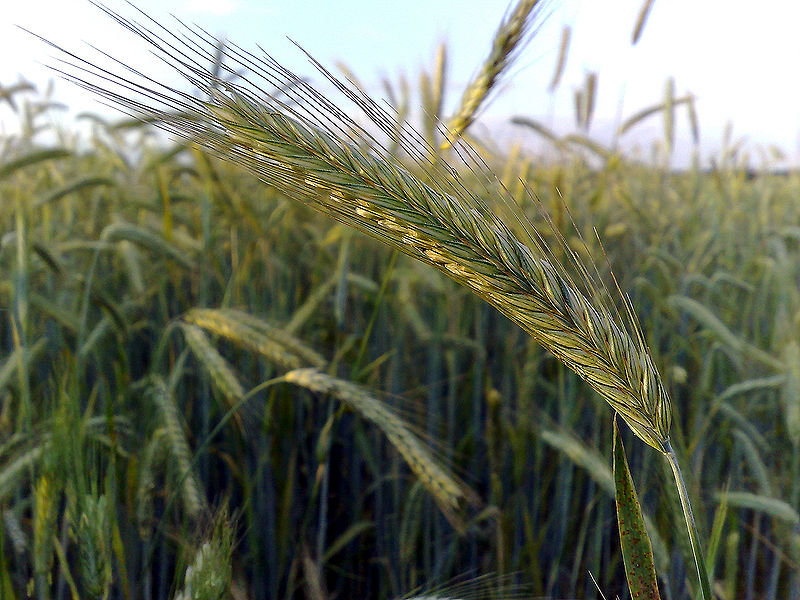 Rye’s history does not get much clearer as we move forward in the archaeological record. Rye is believed to ﬁrst show up in the human diet as a ‘weed’, intermixed with wheat and barley crops. Typically, when a wild plant is domesticated by humans, changes in the grain’s characteristics indicate that a certain trait is being actively selected for. Rye changed from a wild plant to a weed, rather than evolving from a wild plant to a domesticated one due to human intervention. In other words, it evolved not by direct human decision, but indirectly, carried along by the changes wheat and barley underwent at the hands of humans. Domesticated rye, therefore, is indistinguishable from rye the weed, making it very diﬃcult to determine whether rye found in the archeological record was cultivated and consumed intentionally, or whether it shows up merely as a weedy byproduct of wheat cultivation.

Whether domesticated directly or indirectly, the ﬁrst largely agreed upon example of domesticated rye in the archaeological record was found at Can Hasan III, in south central Turkey, dated to approximately 6600 BC. It is believed that it was only as wheat and barley spread to wet and cold environments around the Black Sea and parts of Germany in the 5th century BC that rye began to garner human’s attention as a primary crop. In these harsh environments, rye began to outperform wheat and barley eventually leading to its adoption as a main crop in cold, wet regions of Europe like Russia, Poland, and Scandinavia. Rye was also grown in early colonial America, making its way with European settlers in the sixteenth and seventeenth centuries. Some historians believe rye ergot, a fungus, may have triggered hallucinations leading to the Salem Witch Trials in 1692. In fact, it is from ergot alkaloids that a Swiss chemist ﬁrst synthesized lysergic acid in 1938.

Today, the main producers of rye in the world are Germany, Russia and Poland. Rye breads and other rye products are much denser than their wheat-based counterparts. Rye ﬂour contains diﬀerent proteins than wheat, which do not create the same cohesiveness in gluten bonds as wheats protein. This results in a denser loaf and smaller crumb structure for which Nordic and Germanic rye loaves are known. 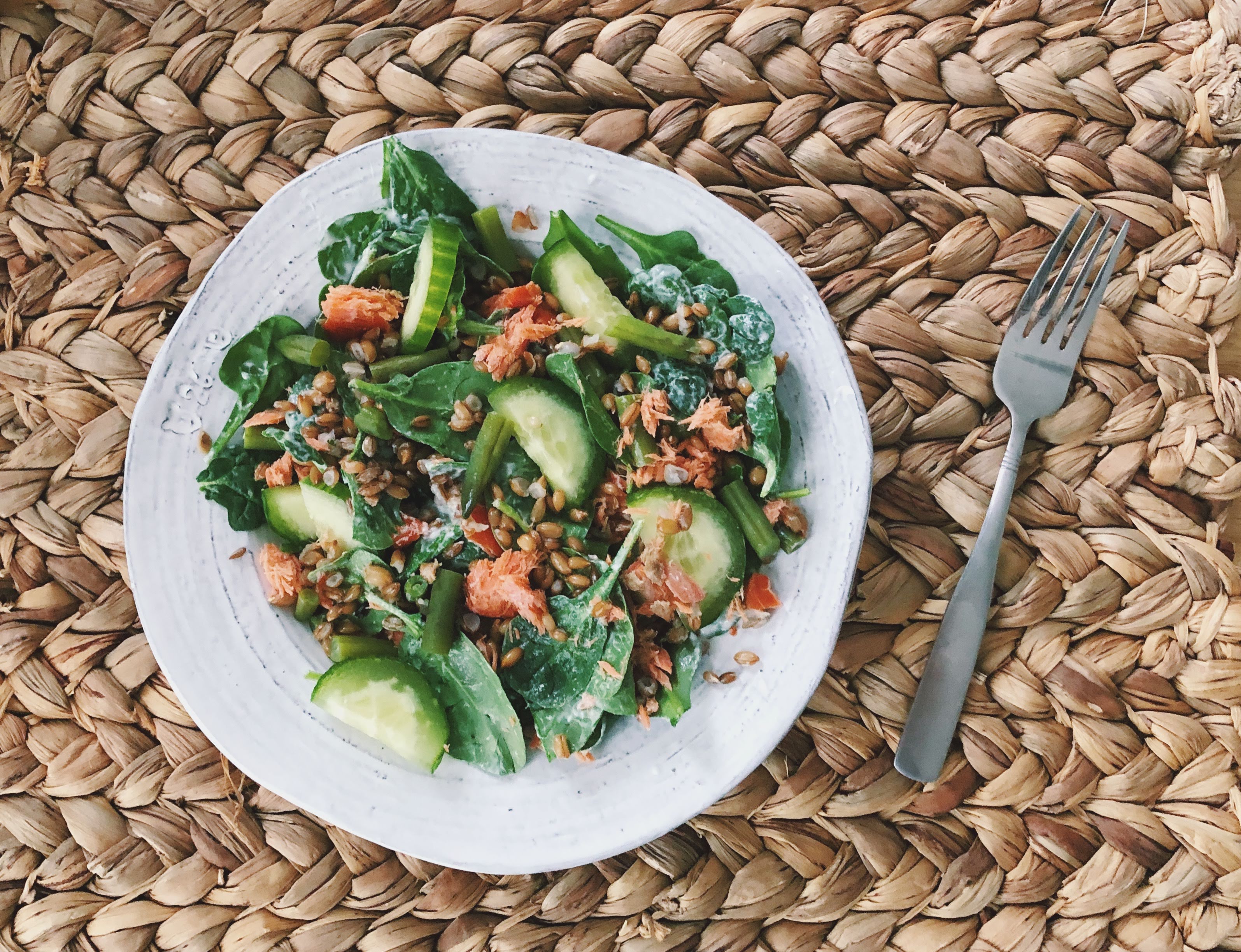 To cook whole rye berries or whole triticale, soak one cup of dried grain overnight. Drain the soaked grains, then add 4 cups of water. Bring to a boil and simmer for 45-60 minutes. This will yield 3 cups of cooked grain. Rye berries and triticale berries can be used interchangeably with wheat berries in most recipes, and work especially well in pilafs, casseroles, and grain salads. Rye ﬂour adds a distinct, rich ﬂavor to baked goods, especially in yeast breads. Rye ﬂakes and rye grits work well in breakfast porridge or polenta-style recipes. Rye is rich and slightly tangy, and works well in Eastern European recipes, especially with cabbage, beets, mustard, raisins and sweet-and-sour ﬂavors. One serving of cooked rye (¼ cup, uncooked) has 140 calories, 6 grams of ﬁber and 4 grams of protein. Try out these great rye recipes below!