Last week Oldways President Sara Baer-Sinnott and I participated in the Whole Grains Summit 2012 held in Minneapolis, along with 300 others from 18 countries. Organized by the Grains for Health Foundation, this event was packed full of thought-provoking presentations and discussions for those of us (like yours truly) who are fascinated by every aspect of whole grains.

Deﬁnitions: What is a Whole Grain Food?

How much whole grain needs to be incorporated into a food before it “counts” as whole grain? 8 grams per serving? 51% of the grain? 100% of the grain? The question is essential for designing research studies, communicating dietary advice, and labeling packages, yet a wealth of diﬀerent standards currently hold sway, with little agreement between diﬀerent agencies of the same government, let alone between diﬀerent countries.

Although this topic was the subject of one of two pre-session workshops and one of four Monday tracks at the conference, the only consensus we reached is that there’s no simple answer. Many participants concluded, by the end of the event, that it may be neither possible nor necessary to come up with one single deﬁnition that works for all circumstances in all countries.

“Let’s not get too tied up in how many servings, how many grams. Let’s just switch from reﬁned to whole grains.”
Eric Rimm, PhD, researcher, Harvard School of Public Health (USA)

“Foods with ≤ 51% of grain as whole grain provide about 30% of intake. So if we don’t count them as whole grain, we miss a lot, and maybe disincentivize foods that these people count on to get their wg.”
Chris Seal, PhD, Researcher, Newcastle University (UK)

“We’re all going to be better oﬀ if we eat products that contain more than 0% whole grain.”
Bill Stoufer, President, ConAgra Mills (USA)

“When you get to the top quintile [of whole grain consumption] it doesn’t matter what your deﬁnition of whole grain is.”
Paul Jacques, PhD, Researcher, Tufts (USA)

Gluten Intolerance: Why is it increasing?

Evidence is mounting that gluten intolerance has increased four-fold in the last half century. Why this has happened – and what we can do about it – were hot topics at the conference, with interest growing as the days went by. (For background, see our previous blog on this topic.)

Joseph Murray, MD, from the Mayo Clinic, gave an excellent presentation during Saturday’s pre-conference Research Workshop, in which he mentioned several factors that may be contributing to an increase in gluten intolerance. I’ll mention just a few here:

• Infancy Factors. Babies born by Caesarian are twice as likely to develop gluten intolerance, according to Murray. Swedish data also show that babies who are still being breast-fed when they ﬁrst eat gluten foods are protected against celiac disease.  “We often wean babies, start them on cereal, and put them in day care, where they’re exposed to infections, all at once.” (Infection and injury to the gut can sometimes trigger celiac disease.)

Plant breeding also came up as a factor. Modern plant breeding (even non-GMO) tends to focus on yield, blight- and pest-resistance, and processing ease. Little research has been done on whether changes that address these issues have resulted in unintended consequences for human health.

Murray says that although 30-40% of Caucasians have a genetic predisposition to celiac disease (HLA-DQ8 and HLA-DQ2), only about 1% of the overall population suﬀers from celiac disease. It’s important to learn more about the triggers that cause these genes to express, to reverse the increase in gluten sensitivity and celiac disease.

“We need a new paradigm. The true measure of the success of agriculture is the health of the society it serves. Public health should be paramount.”
John Finley, National Program Leader, USDA/ARS (U.S.)(who was not speaking in his oﬃcial capacity)

A few years ago, the whole grains community had a giant “huh?” moment when the largest clinical trial to date – often referred to as the WholeHeart or Brownlee study – showed no beneﬁts from consuming whole grains. Chris Seal (Newcastle University, UK), who was a lead researcher in that study, presented results from his latest clinical trial (the GrainMark study), which was much more conclusive, showing a signiﬁcant reduction in blood pressure. Seal humbly explained where the Brownlee study went wrong – and how the GrainMark study addressed those shortcomings.

“Even when we do studies that don’t show beneﬁts [for whole grains], we don’t ever see negatives!”
Chris Seal, PhD, Researcher, Newcastle University, UK

“Fiber mixtures like those you get in whole grains are better for you than isolated ﬁbers. Insoluble ﬁber is absolutely essential… The human microbiome is being starved [by the typical Western diet].”
David Topping, PhD, Researcher, CSIRO, Australia 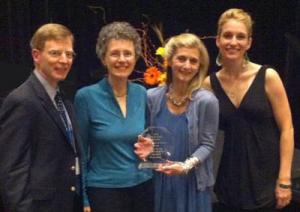 I can’t end this blog without acknowledging one more special thing that happened at the Whole Grains Summit 2012 in Minneapolis: we got an award! The Grains for Health Foundation honored Oldways and the Whole Grains Council for our work in promoting whole grains, by giving us one of four awards at the conference. Sara and I are accepting the award, above, from Len Marquart and Denise Hauge of the Grains for Health Foundation. How cool is that? (Cynthia)

Dr Robert Peers
The Council might be interested to learn that the phytic acid ingredient in grains, nuts and legumes has major anti-ageing properties. The myo-Inositol derived from phytic acid has specific actions against 1) anxiety 2) anxiety-related cravings for food, alcohol tobacco, chocolate and marijuana 3) diabetes 4) cancer 5) Alzheimer's 6) Parkinson's and 70 the ageing process. Grain and bean eaters regularly enjoy a long and very energetic life (Inositol activates the key energy gene PGC 1 alpha). Please contact me for further details, if desired. Best Wishes, Dr Rob Peers
Don Stinchcomb
I am constantly trying to learn more about why some foods have a positive effect and others have a negative effect. Your statement regarding phytic acid is interesting especially in light of most cooking directions say to soak beans and grain to assist in breaking down or removing the phytic acid. Please forward your information to me at don@purityfoods.com. Sincerely, Don