Separating the Wheat from the Chaff 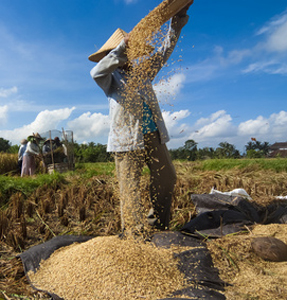 Last week Jaclyn, from North Dakota, wrote the WGC asking if hulled millet is whole grain or not. She’d read that hulling removes the bran, so she ﬁgured the answer would be no – hulled grains are no longer whole. Happily we were able to assure her that hulled grains can still be whole grains, and we thought you all might like to understand why.

Your whole life you may have heard the expression “separating the wheat from the chaﬀ” without any real understanding of its meaning (unless you grew up on a grain farm).

In cereal crops like wheat, rice, barley, oats and others the seed – the grain kernel we eat – grows on the plant with an inedible hull (also sometimes called a husk) surrounding it. Before we can eat the grain kernel, we need to remove that inedible hull. This can require two processes: threshing (to loosen the hull) and winnowing (to get rid of the hull).

In some harvest-ready grains, the hull is thin and papery, and easy to remove. Little or no threshing is required, as the hull is already loose. Traditionally, farmers would toss this kind of grain into the air, from big ﬂat baskets, letting the thin hulls – called chaﬀ in Middle English – blow away in the wind, or fall through the chinks in the basket. This wind-assisted process for separating the wheat from the chaﬀ is called winnowing and the grains with almost no hull are called “naked” grains. (You can winnow other grains too — the photo here shows rice being winnowed in Indonesia.)

Other grains, even when they’re ripe, have a thick hull that adheres tightly to the grain kernel; these are called “covered” grains and threshing (hulling) them is a real challenge. In the old days, covered grains were often pounded to loosen the hull, or soaked in water; sometimes they even needed to be lightly milled to remove the hull. It’s no coincidence that “thrash” – meaning to whip or ﬂog – originated as a variant of the word thresh. Alas, with such primitive means, some or all of the bran was often lost too, since the healthy bran layer was stuck to the inedible hull.

Today, fortunately, technology has given us much more exacting ways to peel the hull oﬀ of covered grains, without disturbing the bran layer. That’s why covered varieties of wheat like spelt and faro are making a comeback, after being sidelined as too much work to hull. At the same time, plant breeding has helped make more “naked” varieties of some grains available.

A look at the varieties of barley on the market helps illustrate how understanding all this can help you be a better grain-shopper:

Hull-less barley: This is a “naked” variety of barley that’s recently become more popular as more and more people choose whole barley over reﬁned. Its inedible hull falls oﬀ naturally or with just a little nudge, leaving the complete whole grain for our enjoyment.

Hulled barley: This is a “covered” variety of barley that has had its hull removed with modern technology in a way that leaves the bran intact; it’s therefore a whole grain. (You may also see this described as “dehulled” barley.)

Pearled barley: Pearling is an abrasive process used to remove the hull. It’s something of a blunt instrument, so some of the bran will be missing too. Therefore, even “lightly pearled” barley is not whole grain. And some barley is heavily pearled, so there’s virtually no bran left.

So yes, Jaclyn. Hulled millet is a whole grain, as is hulled barley or any other grain that’s had its inedible hull removed, leaving all of the original bran, germ and endosperm.

If you have questions about whole grains, we’ll happily separate the wheat (the solid science) from the chaﬀ (the rumors and myths). Email Kelly Toups, RD, on our whole grain hotline with your questions. (Cynthia)

Huy Khuong
Hi there, I am wondering that what farmers normally do with the inedible hulls once seperated. Can we use this inedible hull for something else? Thanks Huy K.
Cynthia

One use for inedible hulls is biofuels (ethanol) -- wheat chaff is apparently a good material for making ethanol as described here. Quaker oats supplies oat hulls to biomass plants, too. Buckwheat hulls are used for animal feed -- and are often used in beanbags and for some pillows. There's not much you can do with it at home -- but as you can see, there are some uses for these inedible hulls.

John
Use hulls for a soil amendment. I use rice hulls as an amendment for potting soil, to improve drainage, and it is useful for lightening heavy clay soils as well.
Cecily

Hi Kelly Can you tell me please how to separate a very small amount of oats that I've grown at home from their husks? Cecily

I haven't tried farming my own grains, so I'm not sure what the best approach would be first hand. My best advice would be to reach out to the agriculture department at your local university.

Gil
Three questions on grains, including mention of anyone who has tried this. 1. By grinding up OATS with hull left on, without dehulling, can this be boiled and eaten like oatmeal with extra fiber ?? 2. Will the extra hull material bother the digestion in the intestines ?? 3. What percentage of hull/chaff/husk left mixed in with the ground up OATS would be acceptable for eating as oatmeal ?? .
Cynthia

I think you've stumped us today. No one at the Whole Grains Council has ever tried that, and we couldn't find any research or reports on eating oatmeal with the hulls. Whether or not it would bother digestion / intestines would probably be different from one person to another. Really hard to answer -- if you want extra fiber, eat berries with your oatmeal, or add extra oat bran... there are a lot of delicious ways to get extra fiber! Anyone else out there ever tried this, and can give Gil some feedback?

Chris
My dad said his family had to rely on unhulled whole oats after WWII, when there were food shortages in Europe, and that one of his sisters had trouble eating the hulls and would cry when she was told she had to eat her oatmeal without picking them out. I guess they were really tough. I don't know if they tried grinding them, but I've tried grinding unhulled buckwheat, and the hulls wouldn't grind up very well, and remained as hard little bits in the flour, pretty annoying to eat. I wonder if using an electric coffee grinder might pulverize them enough to be acceptably edible.
Caroline-WGC
Thanks for sharing that family story with us, Chris! That's really interesting.
Peter
Thanks for sharing this. Yeah, I too remember eating oatmeal with the hulls in late 40's and early 50's in Europe. Didn't matter how well they were cooked, still scratch your throat.
Ashley
The hull is a nutrient blocking food. Phytic Acid is found in the hulls of grains and when you eat them it literally binds itself to minerals in the digestive tract and prevents your body from absorbing them. I would try to avoid the hull if possible.
Gil
the CAPTCHA is way too difficult to figure out, most of the time. It took me several tries to get it too work if it actually did.
Cynthia

Sorry you had a problem with the Captcha. We'll be launching a completely revamped website in August and improving everything!