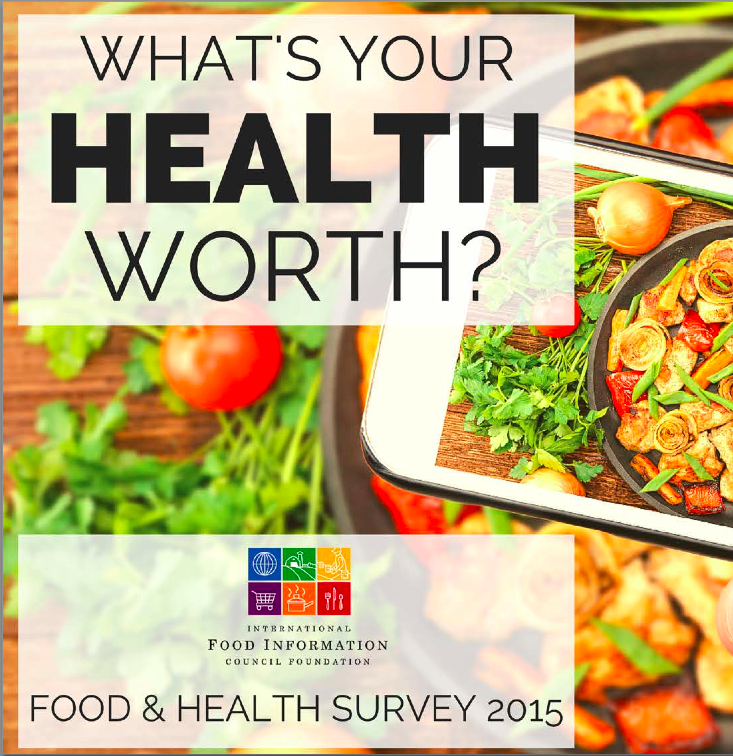 When Americans look at the labels on food packaging, what’s the one ingredient they’re checking for more than anything else? Whole grains.

That’s according to the Food & Health Survey 2015 from IFIC (the International Food Information Council). This is the tenth year that IFIC has done their very comprehensive survey, which always oﬀers great insights into Americans’ attitudes (and behavior!) related to food. Here are some of the questions and answers we found especially intriguing:

QUESTION: Thinking back about the past twelve months, when making decisions about buying packaged food or beverages, have you ever considered whether or not they contain the following?

67% answered whole grains, a “positive” that just slightly edged out “negatives” including calories (66%), sugars (66%) and sodium (63%). For whole grains, that’s a 5 point rise from last year, when 62% of those surveyed said they look for whole grains. We’re proud that the Whole Grain Stamp makes it easy for everyone to look for more whole grain foods.

(It’s interesting to note that, in a later question, only 7% of people said they trusted a food company or manufacturer to provide accurate information about the types of food they should be eating. Yet another reason consumers look for a trusted third-pary certiﬁcation symbol like the Whole Grain Stamp!) 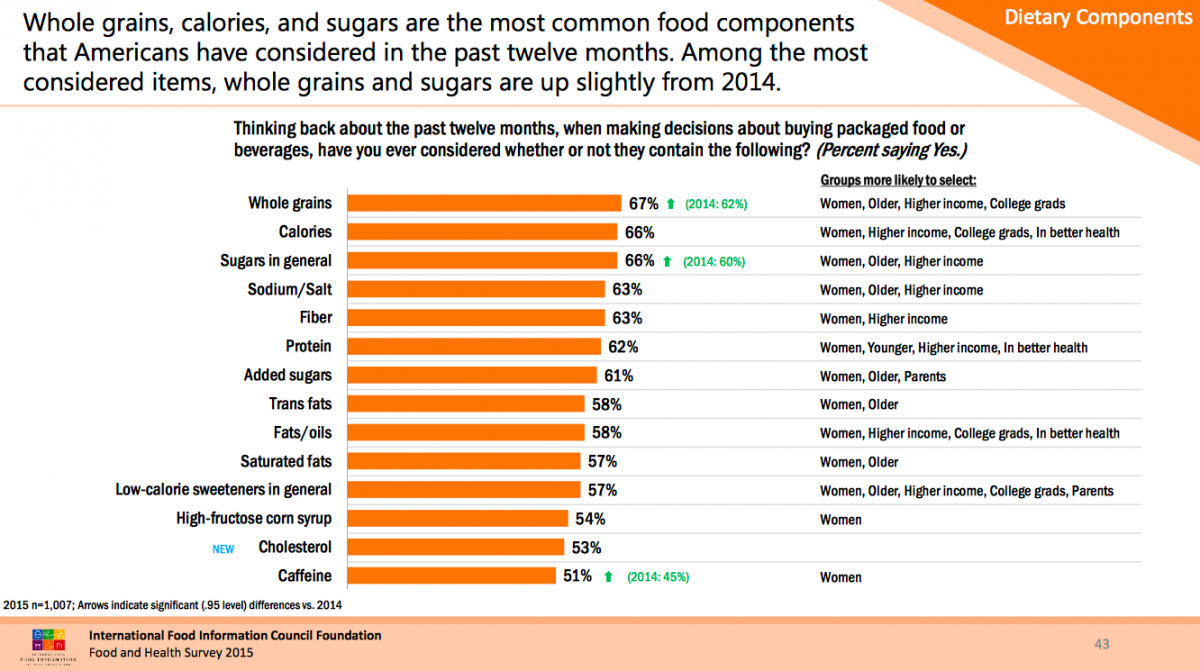 QUESTION: Over the past year, which of the following, if any, have you made an eﬀort to do?

It’s good to know that people aren’t just looking for packages with whole grains – they’re taking them home and eating them. 70% said they were trying to get more whole grains, including 23% who began in the past year and 47% who have been seeking out extra whole grains for more than a year. Here’s the context for this one:

QUESTION: To what extent do you try to consume or avoid the following?

Whole grains came in as most-sought-after from among 41 choices, with 56% saying they are trying to get “a certain amount or as much as possible.” (Fiber at 55%, protein at 54%, and calcium at 43% were the next three most sought after.)

We’re disappointed – though not surprised – to hear that 19% of Americans said they are trying to avoid gluten. While most people have no medical reason for avoiding gluten, you’d have to live under a rock to not be aware that gluten-bashing is a big fad at the moment. (See our GF page for links to the facts.)

The IFIC survey puts this 19%-avoiding-gluten ﬁgure in context, however. Here are the two dozen things that Americans are avoiding even more:

50-55% are trying to avoid sugars in general, added sugars, sodium and salt.

So, as unfounded as widespread avoidance of gluten may be, it turns out that many substances in our food supply concern a much greater number of people.

QUESTION: To what extent do you agree or disagree with the following statement: “I would rather hear what I should eat than what I should not eat.”

Despite that long list of foods people are trying to avoid, it appears that many of us are heartily sick of the nutrition-nanny, “don’t eat this, don’t eat that” messages that pervade books and the web. A whopping 78% of people strongly agree (33%) or somewhat agree (45%) that they would prefer positive messages about what to eat – like those delivered by Oldways and the Whole Grains Council. This question came in at the same total of 78% last time it was asked, in 2013 – but this time those who “strongly agree” was even higher. Let’s all try to focus on all the delicious, healthy whole foods out there, that we can enjoy. 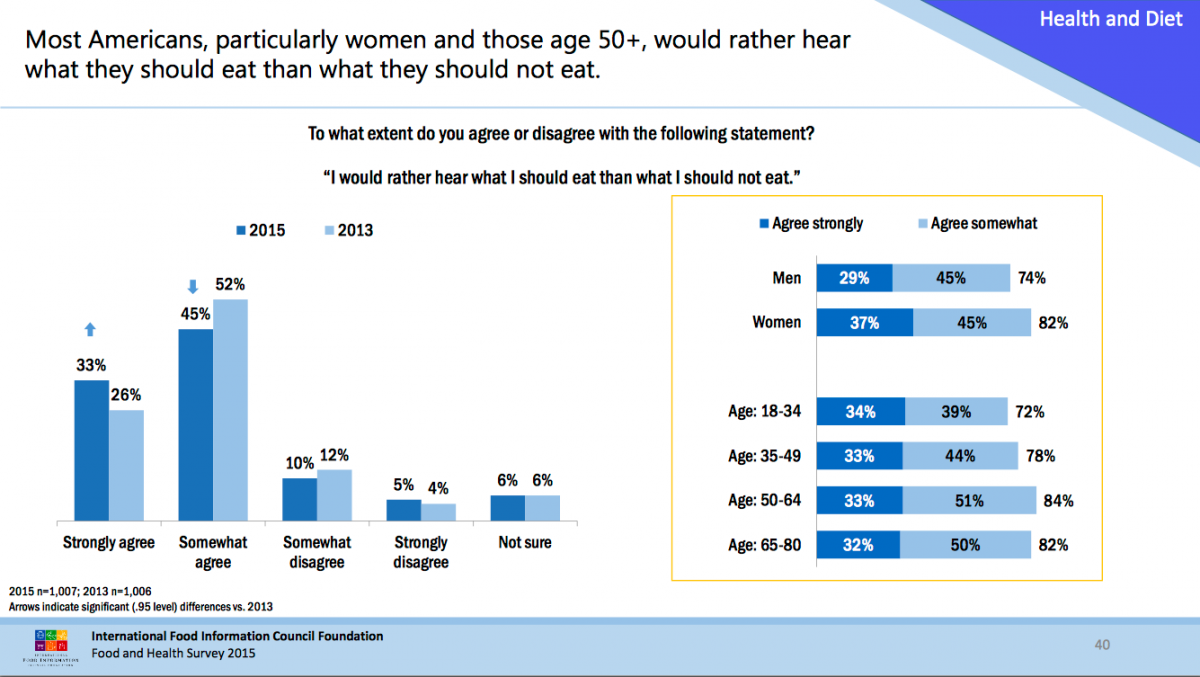 The preference for positive messages and actions was clear in this question, too. In 2015, only 13% of people said they were looking for “free from” messages on packages (such as fat free, sugar free) – down from 24% in 2012.

Whole grains are perfectly positioned with this trend, too. Egg white omelets? Skim milk? Sugar-free muﬃns? All of these leave us feeling that something’s been subtracted, taken away from us. When you seek out foods with more whole grains, you’re getting added value – something special and extra to nourish your body. I think we’d all agree that’s a more aﬃrmative and rewarding approach than constantly dwelling on what’s been taken out of a food.

Thanks, IFIC, for taking such a good snapshot of the tremendous momentum that continues for whole grains. (Cynthia)

Nice post! It's really interesting to go through these statistics and definitely we would love to know what should be eaten rather than what should be not.