The "Liveliness" of Freshly Milled Flour

More and more people are milling their own flour these days, so we had to try it for ourselves. Mmm... mmm... good.

You like to grind your own coﬀee beans. You prefer fresh-squeezed orange juice, when you can get it. So why don’t you mill your own whole grain ﬂour?

That’s the question that kept running through my mind as I put a mix of red wheat berries and barley into the hopper of a grain mill attachment on my kitchen mixer. The mixer jiggled the grain kernels into a set of compressed-stone wheels, and soon a thin stream of ﬁne, tan ﬂour fell into the mixer bowl.

I measured out three cups of ﬂour, added yeast, warm water, olive oil and salt, and created a quick pizza dough. My husband, already fond of our favorite shortcut of using whole wheat ﬂatbread as the base for our homemade pizzas, was dubious. “I was afraid it might be gummy,” he admitted later. (Not all my kitchen experiments work out the ﬁrst time.) “But it turned out thin and crispy, with a delightful crunch.”

We’re not the only ones sold on the delights of freshly-milled ﬂour. Not long after we ﬁnished that ﬁrst pizza, I learned that Wegmans, a supermarket chain in the mid-Atlantic and Northeast states, is now experimenting with milling its own ﬂour. Jo Natale, Wegmans’ VP of Media, told us that baker Nick Greco is sourcing einkorn (an ancient wheat) and rye from local upstate New York farmers, milling it with a handcrafted mill from Austria, and making a special artisan einkorn rye bread.

We asked Jo Natale how customers were reacting to the new bread – it’s selling well – and whether they were drawn to it for reasons of taste or health. “We’re not talking about this as being any healthier for you,” she said. “Well, it’s whole grain, so in that sense it’s more healthy. But we’re just telling people that it tastes great. That’s the most important message. Plus our customers like to support local farmers.”

Wegmans may have only recently bought into the idea of milling its own ﬂour. But Roger Elkus, owner of Me & Ollie’s Bakery in Portsmouth, NH has been milling his own whole wheat ﬂour since 1988. That’s the year he opened his ﬁrst bakery chain (Big Sky Bread Co.) in Ohio. Back then, he used a stone buhr mill, with two granite stones that crushed the grain. He had to learn to dress the stones – roughen the surfaces and deepen the furrows – when the grinding process regularly smoothed them out over time.

Ten years later, in 1998, Elkus moved to New Hampshire and started Me & Ollie’s Honest Bread, still milling his own whole wheat ﬂour every morning before baking. Only this time Elkus bought a hammer mill, which uses a series of metal tines to beat the wheat berries until they’re small enough to go through a screen. His hammer mill keeps the ﬂour even cooler than the stone mill – an important consideration in conserving nutrients in the ﬂour – plus there’s virtually no maintenance; he doesn’t miss his old task of dressing out the stone mill wheels.

Why bother milling fresh at all, though? Elkus’s voice became passionate as he described the ﬂavor diﬀerence: “There’s a sort of liveliness, a depth of ﬂavor, in freshly milled ﬂour that’s just not there in commercial ﬂour. Once, we did a side by side comparison test of our oatmeal chocolate chip cookies, because I couldn’t imagine – with all those other ﬂavors going on – that the ﬂour would matter. We baked a batch with freshly milled whole wheat ﬂour and another with good quality commercial ﬂour – and the diﬀerence blew me away!” 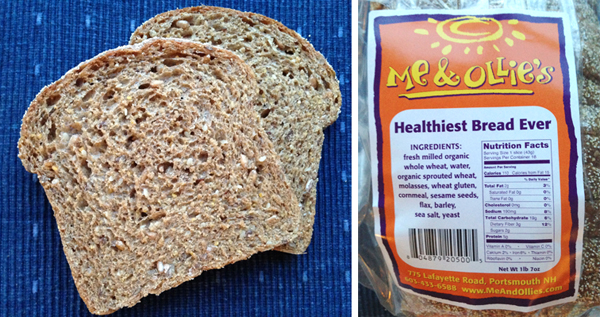 We can vouch for the ﬂavor diﬀerence. Me & Ollie’s “Healthiest Bread Ever” is the staple daily bread we eat in our family. As you can see on the label above, it includes nothing but great honest ingredients – nothing unpronounceable.

Are you curious about the diﬀerence between fresh-milled ﬂour and store-bought? Consider buying a stand-alone grain mill or an attachment for your kitchen mixer. Or see if someone’s baking bread with fresh ﬂour near where you live. Here are just a few other examples we found with a quick Google. Just-in-time milling is deﬁnitely a growing trend! (Cynthia)

Kathyrn Ayres M...
Is it possible to make bread that rises from 100% home milled wheat berries? I am having a hard time getting a loaf to rise and not be so dense. Many of the recipes I have found use all purpose flour with their home milled flour. I was trying to avoid that. Is it possible without having to add dough conditioners or gluten? Thanks for your help! Kathryn Ayres MA, RD, LD/N
Cynthia

I haven't yet tried baking bread with flour I've milled -- I'm new to this! My pizza crust didn't rise as much as it might have with added gluten, but it still tasted great. I note that the Mockmill folks have a recipe for Sunflower Raisin Brown Bread on their website. I would definitely suggest using a recipe that's been tested with freshly milled flour. You might also try this from The Perfect Loaf or recipes from this website called Grain Mill Recipes. When you get your own recipe perfected, tell us -- we'd love to post it on the WGC site with a photo of your bread! (Cynthia)

Anonymous
Fresh milled wheat will absorb a lot more water. Try at least 20 percent more to start. You can also cut the amount of yeast used by 75 percent.
Lori
I know this is ages after you posted but maybe I can’t still offer help. Use 2/3 hard red wheat and 1/3 hard white wheat. This will help it not be so heavy. You can also soak the freshly ground wheat flour in warm milk for an hour. It helped develop the flour and gives the flour time to absorb the moisture. But the biggest difference I have seen is to mix the dough well but keep it wet. Meaning it shouldnt be “smooth” like regular flour dough. If the dough is smooth you have too much flour and youll make a brick. Add just enough flour that if using a mixer the dough is *just* pulling from the sides. Not cleaning the sides. Keep that dough moist! Good luck!
Julia
Hello Readers, The texture the smell and the taste is incomparable to that of any store bought flour sitting on the shelf! And if your into fitness and strive for living foods that help you to achieve your optimal health and fitness goals then your in for a great ride! I have been baking since Ive been twelve years of age and I have been milling a variety of grains and baking for over ten years. I have experienced amazing health benefits with a high level of fitness for many years. I have been inspired by all the awesome grains, fruits and vegetables containing an abundant amount of nutrients to create my recipes. I would love to share with many who need and or love to search for better health options. This is why I have felt very passionate about starting my own bread bakery here in Manhattan. I want to offer customers something so flavorful that everyone who discovers this bread will rave about it. This very old custom but newer and creative style of bread baking will inspire people to achieve their optimum health! Advise on starting a small bakery business is welcomed, Julia
Richard Okner
For pizza dough. For each 1 cup of fresh home ground organic white wheat berry flour Add 1/2 cup high gluten flour. Ratio 1:1/2 Reason is although white wheat berries are sweeter and whiter and lighter than a whole wheat Pizza dough. White wheat berries have less gluten so mixing with high gluten flour will give the pizza dough a better fluffier rise.
Chris
Used my Komo machine to grind organic hard red wheat I bought from Azure. Sourdough bread I baked yesterday did not have that classic smell of freshly baked bread and no smell of baked bread in my house after baking 8 loafs. When baking with King Arthur bread flour my sourdough bread and house were smelling great. any suggestions, thank you
Caroline-WGC
Hi Chris -- I'm surprised to hear that you didn't experience the characteristic smell of fresh bread as you were baking! Sometimes grains lose the intensity of their flavor when they've been sitting on a shelf for a while, but it's unusual that you would get that fragrance after fresh-milling the flour. My best suggestion would be to replace the grains you bought and see if perhaps a different bag/variety produces different results.