Whole Grains on Menus up 40%

Every few months, we get out our spyglass and check menus around the country for new whole grain options at restaurants. Here are a few we hope you'll check out...

Whole grains are mentioned on 40% more menus now, compared to four years ago, according to an article in yesterday’s Nation’s Restaurant News. And customers are taking advantage of that fact: according to Mintel, 21% of consumers say they’re ordering more whole grains in restaurants.

Every few months we take a look around the USA and glory in the increase in whole grain options in restaurants, as part of our ongoing #SpotWholeGrains campaign. Here are a few of the ﬁnds we’ve spotted since our last update in January, that we’d like to share with you.

Modern Market (20 locations in Colorado, Texas)
Modern Market started as one restaurant in Boulder, CO in 2009, and has grown to 20 in Colorado and Texas, with expansion to Arizona and D.C. in the works. The small chain is determined to exemplify Michael Pollan’s well-known philosophy of “Eat Food. Not too much. Mostly Plants.” As their website says, “We believe healthy, delicious food is a huge component of a happy life. We want our kids to grow up in a world where clean food as as ubiquitous as clean water.” 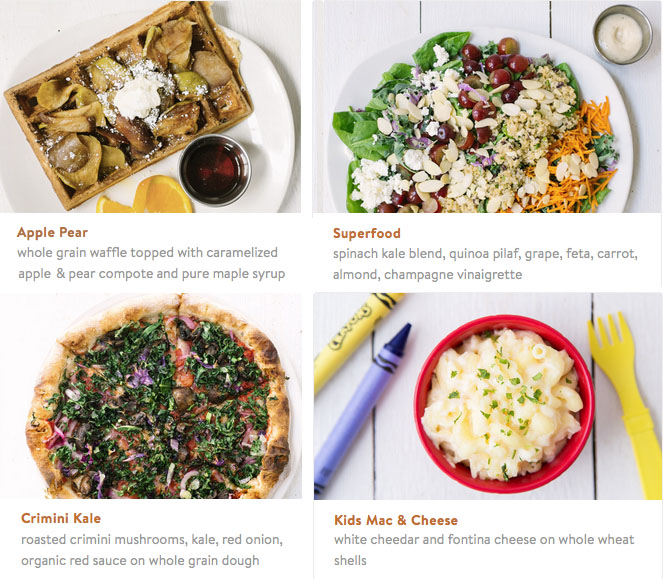 I hope they come to the Northeast soon, because they oﬀer whole grains all day, as shown in the image above: 100% whole grain waﬄes at breakfast, salad with quinoa at lunch, and pizzas on a 100% whole grain crust. The waﬄes and pizza crust aren’t an option just in case someone asks for whole grain — they’re simply how this restaurant always makes their waﬄes and crust delicious for everyone. Topping it oﬀ, the Mac-and-Cheese on their kids’ menu is also made with whole grain shells. Yay. 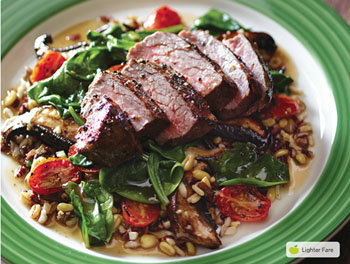 My husband put me on to this piece of good news. He wandered into Applebee’s on a business trip to North Platte, NE, last week, and came home raving about the chain’s Pepper Crusted Sirloin & Whole Grains – which Applebee’s describes as “a bed of hearty whole grains with sautéed spinach, ﬁre-roasted grape tomatoes and portobellos.” This is a man who generally comes in the door saying, “Gee it’s good to be home where I can get real food…” so I had to check it out. Looks quite lovely, and it keeps company with  Cedar Grilled Chicken over a blend of rice (points oﬀ ‘cause it’s not brown rice) and quinoa.

Pie Five (85 locations in 21 states)
Uncle Maddio’s (40 locations in 13 states)
At Pie Five, whole grain thin crust is one of four crust choices on every customize-your-own pizza. As their name implies, you get your pizza in ﬁve minutes at Pie Five, even if you want whole grains. Pile it high with all kinds of veggies, as Diana N. showed on Yelp (below left), and you’ve got a very healthy meal – whole grains, tons of veggies, and small amounts of cheese. Nothing in common with the stuﬀed-cheese white-crust grease bomb served at some pizza places! 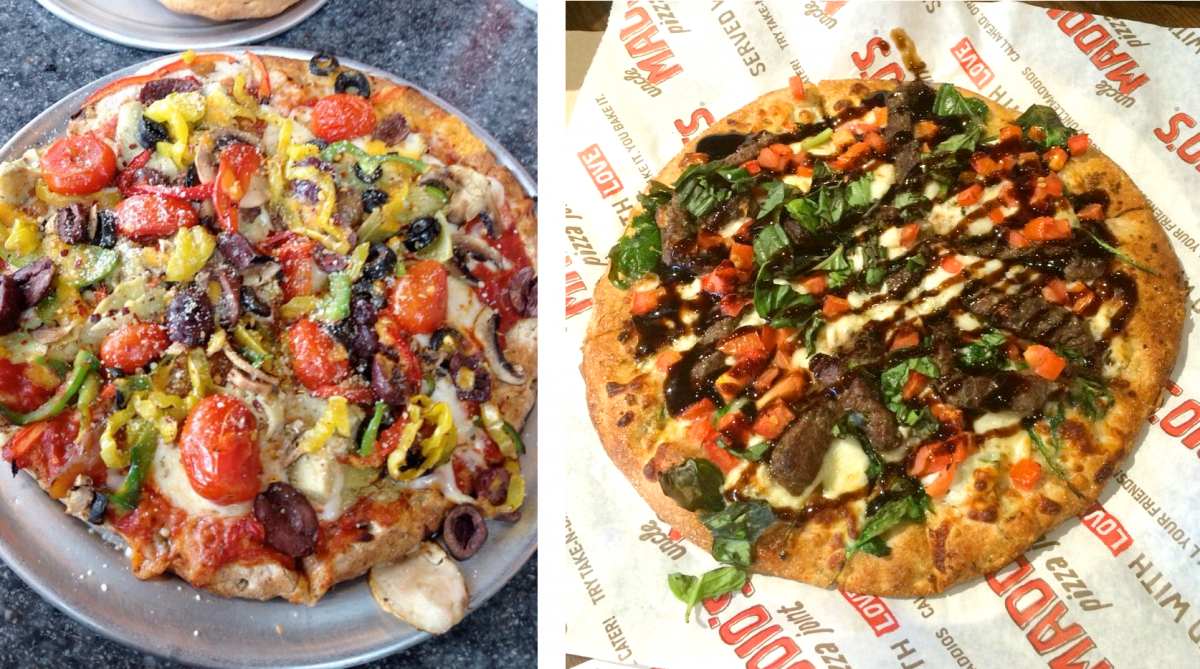 Uncle Maddio’s is another up-and-coming have-it-your-way chain. Whole wheat is one of their three standard crust choices, and from there you can take it in any direction you want. The photo on the right above, from June C. also on Yelp, shows a Steak & Blue on whole wheat. (It’s great to have Yelp to show us how real people are enjoying their whole grain pizzas.) Can’t wait until the Big Guys in the pizza world catch on and start oﬀering whole grain crust routinely as an option.

Au Bon Pain (more than 300 locations in the US and internationally)
Just before Whole Grain Sampling Day on March 30, Au Bon Pain contacted us with the good news that they’d be sampling their Multigrain Baguette at participating cafés (right, in photo below), and that they also had a new Whole Grain Wheat sliced bread. These new breads join other whole grain options, like their Skinny Wheat Bagel (delicious on their breakfast sandwiches, which have served me well for early morning ﬂights at many an airport). Au Bon Pain also has a line of Harvest Hot Bowls served on brown rice, including Mayan Chicken (left in photo below), Roasted Vegetarian, and Mediterranean Chicken options. It’s no wonder ABP is consistently named as one of Health magazine’s Top 5 Healthiest Restaurant Chains.

Don’t give up, people. There are more and more restaurants serving fresh whole foods, including whole grains. When you Vote with your Fork and seek them out, you’re ensuring that the momentum will increase. Email us and tell us, whenever you #SpotWholeGrains!