If you think protein's only found in meat, fish, eggs and other animal foods, you may be surprised to learn that whole grains can help fulfill your protein needs...

If you’re trying to eat more protein, you’re not alone. But if the only things that come to mind when you think “protein” are grilled meats and Greek yogurt, a simple swap for boosting your protein intake could be hiding right under your nose: just switch to whole grains! Most grains have about 25% more protein when eaten their whole form; whole wheat ﬂour, for example, has 28% more protein than reﬁned wheat ﬂour.

Here’s some food for thought: Of the six foods below, which have the most protein?

That’s good news, given that so many of us are looking for more protein. According to a 2014 Mintel report  titled “Protein Fever,” one-quarter of Americans said they were eating more protein than a year ago. In a 2015 analysis, NPD Group said, “It’s protein’s time to shine” and went on to say that heightened interest in protein extends to all age groups. 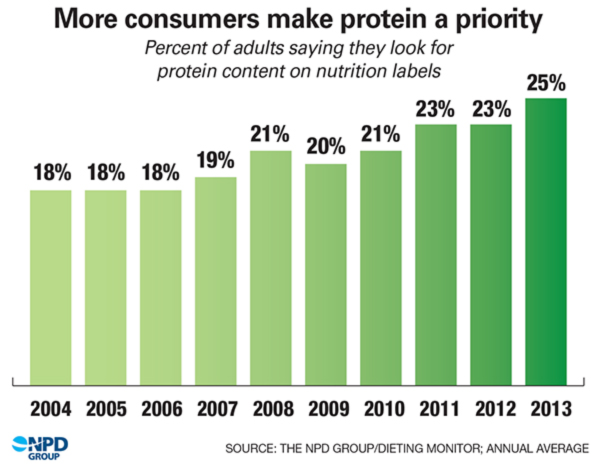 In a late 2015 Forbes.com article, Phil Lempert predicted that, “In 2016 we will see new kinds of proteins that are more sustainable and aﬀordable than animal sources. Algae, nuts, vegetables, yeast and even insects will be used as ingredients to up the protein punch.” And sure enough, a few manufacturers are responding by adding cricket ﬂour to boost protein content. Or adding peanut ﬂour to brands that never contained it before, to the consternation of some with peanut allergies.

Given that companies are looking for a protein punch in every place imaginable, it is only a matter of time before manufacturers embrace the added value of whole grains, rather than trying to disassemble nature and put it back together again. Especially since whole grains also boast a host of other taste, environmental, and nutrition beneﬁts.

Join us in spreading the word. Whole grains oﬀer great value, because they’re signiﬁcantly higher in protein than reﬁned grains. Download our handout called “Protein? In Grains? Yes!” if you’d like to know more. (Cynthia)