Why Ancient Wheats Got Left Behind

Are your favorite grains naked or covered? Find out what these terms mean – and how they matter to the current resurgence of ancient grains.

What’s the deﬁnition of an ancient grain? That’s a question we’re often asked, and as we’ve explained elsewhere on our site, we generally deﬁne ancient grains as grains that have been largely unchanged over the last several hundred years. No one could be bothered to nurture those grains, invest in a breeding program for them, or otherwise show them some love.

Somewhere in the back of your mind, your inner two year old is probably reading that and clamoring, “But why?” Good question. Why didn’t anybody love those poor neglected grains? Why did they get shoved back into a corner and ignored? And what’s helping them stage a comeback today?

Is that grain naked??

As we remind folks all the time, grains have three edible parts – the bran, germ and endosperm – when they’re growing in the ﬁelds. If all three parts are still present when you’re eating those grains, they’re considered whole grains. Those are just the edible parts, though: grains typically have an inedible hull, also, that protects the three edible parts. Some grains have a thin, papery hull that’s easy to remove. It may fall oﬀ as the grain kernel ripens in the ﬁeld, or it may be easily separated from the kernel through threshing (whacking it a bit to loosen the hull) and winnowing (tossing everything in the air to separate the hulls from the kernels). Kernels that have loose, easily-lost hulls are called naked grains.

Other grains have hulls that adhere tightly to the grain kernels; these are called covered grains. It’s a lot of work to remove the hull from a covered grain – and when you do, it’s likely that some of the bran will come with it. A blog we wrote a few years ago explains all this, and includes tips for how you can become a better grain shopper by understanding about hulls, covered grains, and naked grains.

Most of us can picture this from our experience with the “hulls” (the peels) of various fruits. It’s easy to remove the peel from a banana or a clementine with your bare hands, but almost impossible to peel a grapefruit (even with a knife!) without taking some of the ﬂesh along with the peel. If you were hungry for citrus and didn’t have the right tools, you’d probably choose clementines over grapefruit any day of the week.

Well, something similar happened with varieties of wheat. Spelt, emmer and einkorn –all falling into the category of ancient grains – are covered grains with tightly-adhering hulls. Thousands of years ago, when wheat was catching on as the world’s leading staple food, farmers lucky enough to come across a strain of wheat whose hull came oﬀ easily would save every precious seed, planting more and more of their land with the easy stuﬀ. Eventually, covered wheats like spelt, emmer and einkorn were crowded out by what we now know as “modern wheat.”

So how do we get those hulls oﬀ?

Today, interest in spelt, emmer and einkorn has surged but the problem of hulling grains like these still remains. Your local Cooperative Extension oﬃce to the rescue. Recently we came across a very cool article that explains just what’s involved with dehulling grains, and how small-scale farmers growing small amounts of covered grains such as spelt, emmer and einkorn can dehull their own grains or get them dehulled at a cooperating mill. 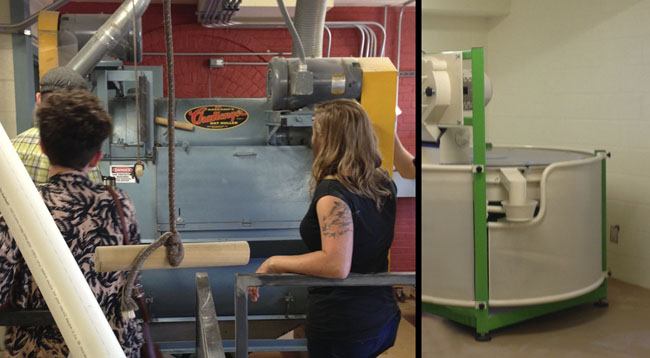 Vintage and new oat hullers at Maine Grains in Skowhegan, ME.

We admit you may have to be a serious grain geek (or an actual grain farmer) to want to learn all the ins and outs of hulling grains that are explained in this article, including

If you’ve been wondering why you pay more per pound for ancient wheat than for modern wheat, knowing what’s involved in hulling it may help you realize why these grains need to cost more – and give you new respect for the hard-working farmers growing your local grains. (Cynthia)