Allowing refined grains to be credited as though they were whole grains sends mixed signals to foodservice providers and manufacturers about how to formulate and serve whole grain products, and it sends contradictory messages to consumers as well. 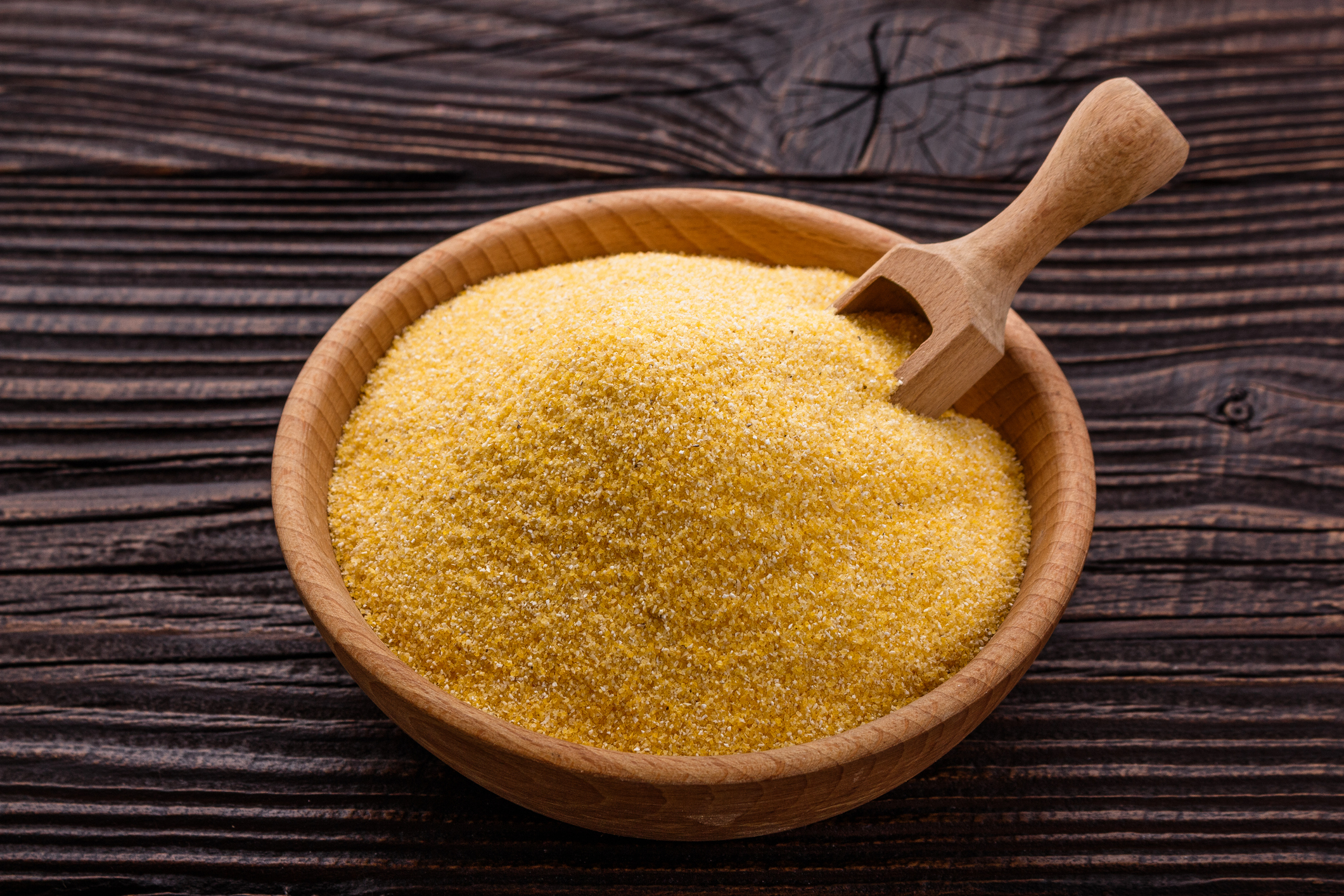 USDA’s Food and Nutrition Service (FNS) released a recent memo with updates to whole grain-rich crediting in their Child Nutrition Programs, which makes new – and rather confusing – allowances for ingredients like reﬁned corn ﬂour and reﬁned cornmeal. Speciﬁcally, FNS is now allowing reﬁned cornmeal and reﬁned corn ﬂour (along with corn masa and hominy) to count as whole grain ingredients for the purpose of whole grain-rich qualiﬁcation. After a move in December 2018 to signiﬁcantly weaken whole grain requirements in school lunch and breakfast programs, it is extremely disappointing to see another shift away from maintaining whole grain standards that support children’s health. Allowing reﬁned grains to be credited as though they were whole grains sends mixed signals to foodservice providers and manufacturers about how to formulate and serve whole grain products, and it sends contradictory messages to consumers as well.

The term “whole grain-rich” is deﬁned in FNS guidelines as indicating that “the grain product contains at least 50 percent whole grains and the remaining grain content of the product must be enriched.” In other words, products that count as “100% whole grain-rich” must be at least 50% whole grain. However, with the release of this new memo, this is no longer necessarily the case. A product made with at least 50% reﬁned grain corn ﬂour and containing absolutely no whole grain ingredients at all could qualify as whole grain-rich, under the revised guidance released last month.

So, what is the nutritional diﬀerence between reﬁned cornmeal and whole grain cornmeal, anyway? How signiﬁcant are we talking?

Reﬁned cornmeal has been stripped of half its ﬁber and loses 64-75% of its essential B vitamins thiamin (B1), riboﬂavin (B2), and niacin (B3). Similarly, it contains less than half the potassium, iron, and magnesium found in whole grain cornmeal. The graph below shows the diﬀerences between the nutritional proﬁles for whole grain cornmeal, corn masa (nixtamalized corn), and reﬁned cornmeal: 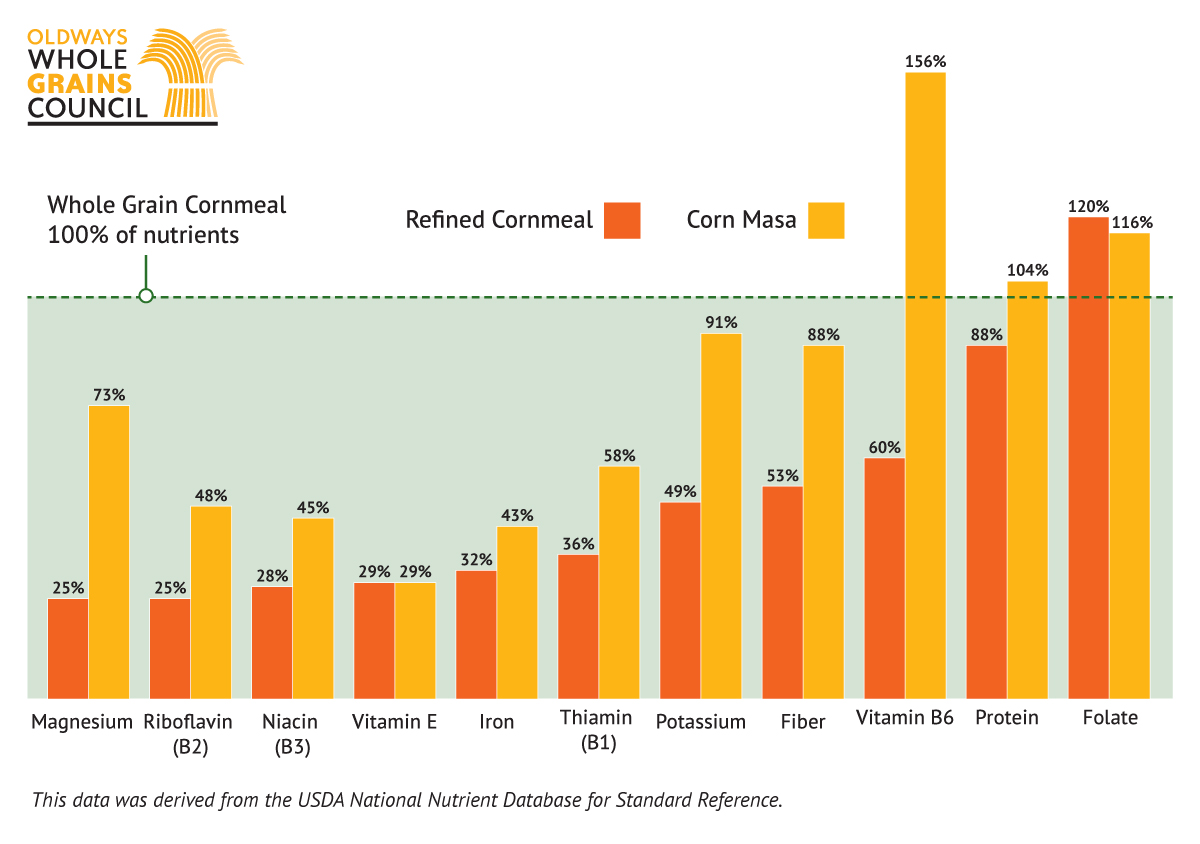 [Please note: for nutrients like vitamin B6, protein, and folate, the increases shown in masa and reﬁned cornmeal are likely due to the fact that these nutrients are present in higher proportions in the parts of the corn kernel that remain after nixtamilization or degermination. The relative proportion of these particular nutrients increases with the removal of other portions of the kernel, despite the absolute amount being unchanged.]

Recognizing the signiﬁcant diﬀerences between whole grain cornmeal/ﬂour and its reﬁned grain counterparts, the FDA has clearly excluded reﬁned corn ﬂour from counting as a whole grain ingredient on package labeling, stating:

The bran, germ and endosperm are integral parts of the kernel and should be present in the relative proportions as found in the kernel to be considered “whole grain.” Therefore, for corn ﬂour or corn meal to be “whole grain” it should include the pericarp as well as the other essential fractions… Degerminated and bolted corn meals should not be considered whole grain products because germ or bran has been removed during processing.

In light of FNS’s recent memo, we want to assure our readers and our members that the Oldways Whole Grains Council remains committed to a deﬁnition of whole grains that is not watered down by the inclusion of select reﬁned grain ingredients. We are not making any changes to our Whole Grain Stamp program or the qualiﬁcations a product must meet in order to display the Whole Grain Stamp on its packaging. The whole grain content displayed on our Stamp will continue to reﬂect only those ingredients that are actually whole! (Caroline)

Cynthia Fan
I saw SP 22-2019 was rescinded. What's the latest from FNS on this? Are they still allowing refined corn meal or refined corn flour to be considered whole grains in Child Nutrition programs?
kelly-oldways
SP 22-2019 was rescinded and replaced with new rules/clarifications regarding corn products in August 2019. Now, they are more clear on corn ingredients counting towards whole grain requirements if they are whole, and enriched requirements if they are enriched. You can learn more here: https://www.fns.usda.gov/cn/crediting-coconut-hominy-corn-masa-and-masa-harina-child-nutrition-programs This is the most recent update regarding corn products that we are aware of.