Buckwheat - December Grain of the Month

We end our calendar year by celebrating buckwheat. Despite its name, buckwheat is not a type of wheat — in fact it’s not technically a grain at all! Buckwheat is one of the three pseudo grains that are not part of the Poaceae cereal family but are considered grains due to their similar uses from a culinary and nutritional perspective. And we sure are glad buckwheat is an honorary member of the family! Buckwheat has a wonderfully robust ﬂavor, welcoming comparisons to hops and hinting at a bit of rose petal on the nose. Currently, buckwheat is on trend with bakers but has a rich history in Asia, where it is used for traditional noodles such as soba, and in Eastern Europe, where it is used to make a type of porridge called kasha.

There are two common types of modern buckwheat, Common buckwheat (Fagopyrum esculentum) and Tartary buckwheat (Fagopyrum tartaricum). The main diﬀerences between these two varieties is their breeding system and preferred climate. Tatary buckwheat is a self-fertile plant. This means it can self-produce, or inbreed, using its own pollen. Tatary buckwheat’s tolerance of frost enables it to grow well in colder climates and at high altitudes. Without Tatary’s tolerance for colder weather, Common buckwheat prefers lower altitudes and is widespread in the temperate climates of the Northern Hemisphere. Common buckwheat can only reproduce with the pollen of a diﬀerent plant, and therefore depends on insects for pollination. In fact, buckwheat honey is a very popular product, known for its deep and nutty ﬂavor. 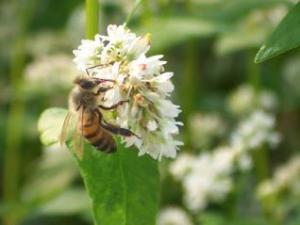 Buckwheat can grow on infertile, poorly drained soil and is relatively well suited for rough land. Globally, buckwheat is a minor crop and is often planted as a crop cover in order to protect soil from erosion between planting seasons. Its short growth period oﬀers the ﬂexibility of planting late in the season, and its deep root system helps prevent erosion. Buckwheat further beneﬁts a farmer’s ﬁeld by smothering weeds and attracting beneﬁcial insects. It can also be ‘plowed under’, or used as a form of compost instead of harvested improving the nutritional make-up of the soil. Check out some more pictures of buckwheat here.

Until recently, buckwheat cultivation was thought to have begun over 4000 years ago in the Yunnan province of Southwest China, and spread west from there into Tibet and the Himalayas. However, new archaeobotany research (the study of human interactions with plants) has yielded evidence of buckwheat in Northern China dating to around 6000 years ago. In light of these new ﬁndings, there is more research to be done to piece together a clear narrative of buckwheat’s beginnings in both regions, but for now we have a rough origin story — buckwheat was cultivated in Northern China as early as 4000 BCE, and in southwestern China and the Tibetan/Himalaya region around 2000 BCE.

From China, buckwheat spread west all the way to the Caucasus region of Europe and east to Japan. Although signiﬁcant buckwheat production and consumption is not seen throughout Europe and Russia until the 16th century, evidence of buckwheat pollen has been documented by archaeologists in Eastern Europe by as early as the 2nd millennia BCE. According to archaeological evidence, by the time buckwheat shows up in Japanese records in the 8th century it was already extensively produced as a rotational crop, having made its way into Japan from the North, through the Korean peninsula a few thousand years earlier. 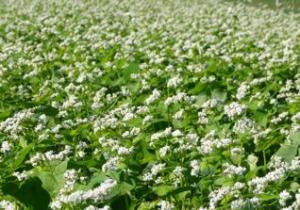 Buckwheat came to America with early European colonists and was most commonly grown in the northeast and northwest of the country. At its peak of production in 1886, buckwheat was most commonly used for ﬂour and animal feed. Major agricultural advances of the 20th century, such as nitrogen fertilizer, increased the productivity of major staple crops like wheat and corn to such a degree that the production of minor rotational crops, such as buckwheat, declined steadily. In was not until the 1970s that buckwheat enjoyed a boost in popularity,  and it continues to be a popular gluten free ﬂour option for bakers. According to the UN, in 2016 Russia lead the world in buckwheat production, followed by China and Ukraine (FAOSTAT data, chart courtesy of Wikipedia)

Buckwheat forms the backbone of many traditional dishes across Asia and Europe. Soba noodles are enjoyed both hot and cold in Japan, and in Korea buckwheat ﬂour and potato or sweet potato starch are used to make the traditional noodle dish naeng myun. Italy’s Lombardy region produces pizzoccheri, a type of short, ﬂat ribbon pasta made with buckwheat and wheat ﬂour. Elsewhere in Europe buckwheat ﬂour is used to make galettes, a famed crepe from the Brittany region of France, and in Eastern Europe buckwheat plays a leading role in the pancake like blinis and blintz’s. For many countries in Eastern Europe buckwheat is most commonly used in its whole form, roasted and made into a traditional porridge called kasha – one of the national dishes of Russia. 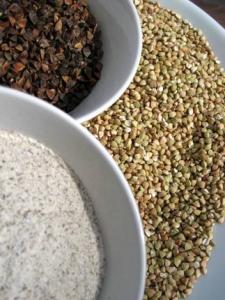 Buckwheat is a terriﬁc energy source, and in its whole grain, or groat, form has high levels of resistant starch resulting in a low GI response. Studies also show buckwheat is more satiating then other grains like wheat and rice and has pre biotic beneﬁts — which as we have written before can contribute to overall health.

Not only is buckwheat a good source of protein in terms of quantity, it is a complete protein, containing all 9 of the essential amino acids that humans do not produce naturally and must consume through food. If you have celiac disease remember, buckwheat is one of the many great gluten free grain options! 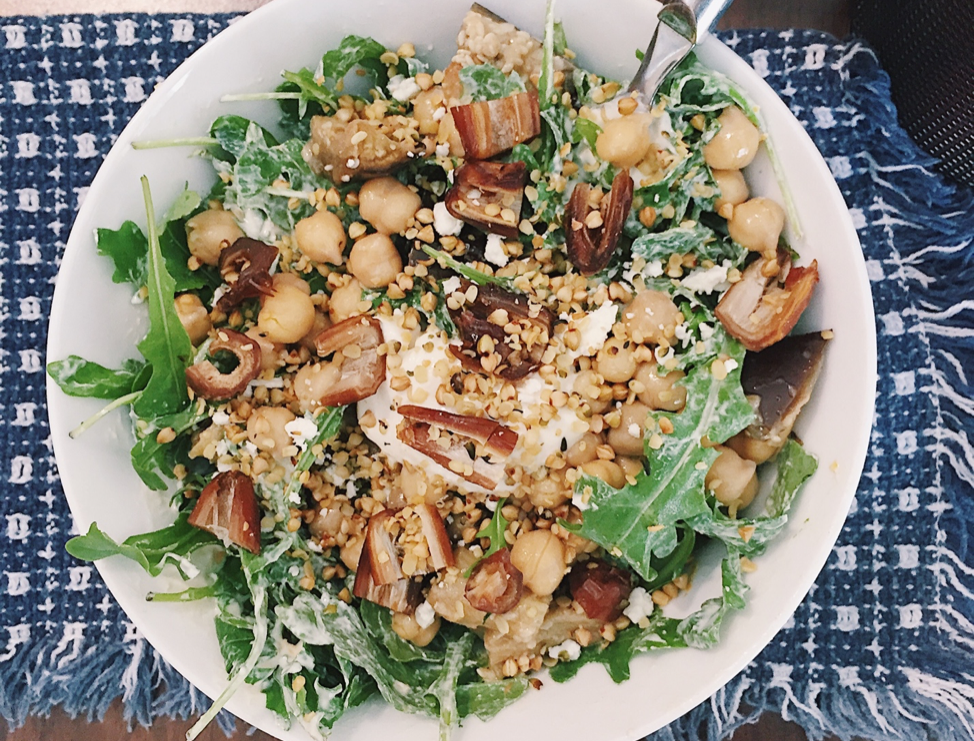 Intact whole buckwheat groats can be found raw or toasted. Remember, raw buckwheat has a much milder ﬂavor than its toasted counterpart! Unlike most whole grains, which need to be cooked in liquid to be rendered delicate enough to eat, toasted buckwheat is delicious as a salad topping (think of it as a substitute for a crouton) or stuﬀed into vegetables. Today, buckwheat ﬂour is also incredibly popular in baked goods.

To cook whole buckwheat groats, add one cup of dried grain with 2 cups of liquid. Bring to a boil, then simmer for 20 minutes. This will yield 4 cups of cooked grain. Whole grain buckwheat groats work well in casseroles and porridge style recipes. Buckwheat is robust and earthy, pairing well with dried fruit, dark spices, beets, walnuts and hazelnuts. One serving cooked of cooked whole grain buckwheat has 110 calories, 2 grams of ﬁber and 2 grams of protein. Try out these wonderful buckwheat recipes below!

Kasha and Beet Salad with Celery and Feta