Wheat July Grain of the Month

July’s Grain of the Month is Wheat.

Wheat is the predominant ingredient in many a beloved grain product, from pastas to bread and baked goods. Its prevalence in the grain retail market tends to make wheat ubiquitous when discussing diverse categories such as cereal grain or carbohydrates, especially for those who eat a mostly Westernized diet. While wheat may seem commonplace and basic to our modern eyes, its past is intertwined with the birth of agriculture itself, and its future intrinsic to the continued development of our global agricultural systems.

Wheat is one of the most-produced grains worldwide. Though wheat production trails behind maize and rice in terms of overall global production, it is the most widely grown crop in the world and its range of cultivation is unrivaled. Mainland China produces the most wheat globally, followed by India and Russia (FAOSTAT).  Together, maize, rice, and wheat provide nearly 60% of total plant calories that humans consume, and wheat itself is estimated to provide 20% of daily food calories. In addition, wheat contains 13% protein, which is higher than most other grains. Though it does not contain all the essential amino acids necessary to make it a complete protein, wheat’s prominence as a food source globally makes it an essential source of plant protein especially in developing nations.

Wheat production brings home bronze once again in the US market, where its production levels trail behind corn and soybeans. The United

States, however, is one of the world’s leading wheat exporters, only just edged out by Russia for the top spot in 2019. The US exports around 50% of its annually produced wheat, making up 16% of total global wheat exports. Global demand for wheat is only expected to rise as ‘industrialized’ diets spread across the world and demand for processed food grows. The world population is predicted to grow to more than 9 billion by 2050, and the demand for wheat is expected to rise with it, increasing by 60%.

Close to 95% of wheat grown globally is Triticum aestivum, known as common wheat or bread wheat. The remaining 5% of global wheat production is composed of Triticum durum, known as durum wheat or pasta wheat, which thrives in hotter and drier climates. Though common wheat and durum wheat make up the vast majority of wheat produced globally, interest in heirloom and ancient grains has spiked due to the growing popularity of sustainable plant-based diets. This interest has created a growing market for ancient wheat varieties such as einkorn, spelt, Kamut® and emmer (or farro). New varieties of wheat, such as kernza the perennial wheat, and tritordeum, a barley wheat hybrid, have been produced to address current climate and sustainability challenges.

Think you know wheat? Click here to learn more about many diﬀerent kinds of whole wheat and to see photos and check out these ﬁve surprising facts about modern wheat. For a deeper dive listen in to our recent webinar Wheat Sensitivities: Sorting Fact from Fiction.

It is generally agreed that agriculture originated in the Fertile Crescent over 10,000 years ago with the domestication of cereal grains including wheats like emmer and einkorn, among other crops. Domesticated emmer wheat is present at numerous archaeological sites in the area, some dating back as early as 10,800 years ago. To place the origin of agriculture in the Fertile Crescent – which encompasses a large swath of the modern Middle East from Iran over to Israel and into Southeast Turkey – two pieces of evidence are largely cited. The habitat of domesticated cereal grains’ wild ancestors, including wild wheats, barley, and rye, all overlap in this region. In addition, the region’s archaeological record shows early human interaction with these grains. Early Neolithic archeological sites contain the seeds of these wild species demonstrating cultivation, while later habitation of the sites contain the domesticated forms of the cereal grains. Recent molecular evolutionary studies have added another line of evidence, aiding archaeologists in narrowing down exactly where in the Fertile Crescent agriculture may have been ‘invented’. By tracing genetic similarities between certain wild strands of wheat and their domesticated counterparts, archaeologists have narrowed down the likely origin of agriculture itself to a more localized region in Southeastern Turkey. 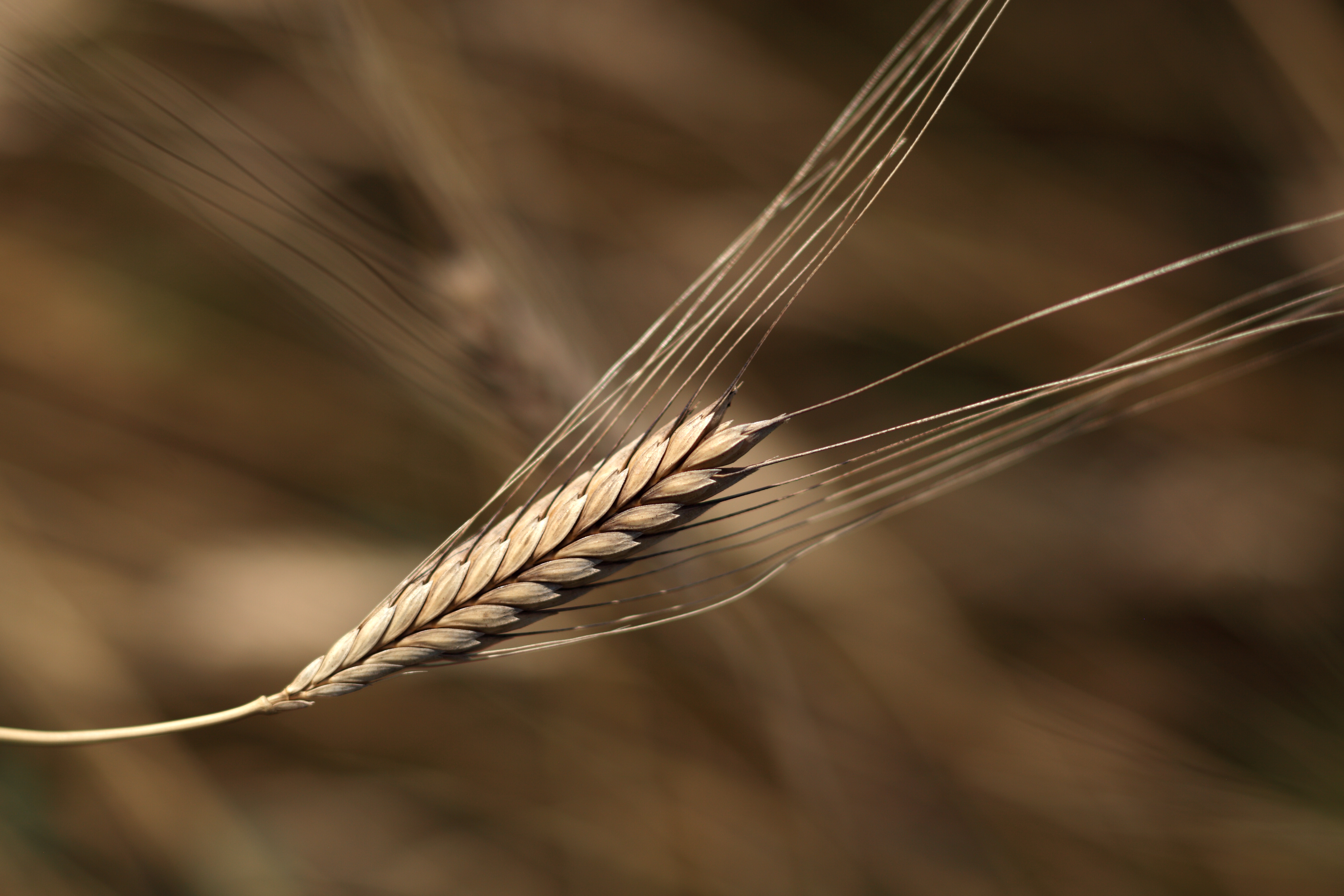 Whenever a plant is domesticated, its genetic diversity decreases. Genetic diversity in wheat is lacking due to the early domestication of the species, compounded by subsequent breeding practices. Mapping a crop’s genome helps breeders understand how to create more diversity within domesticated crops, resulting in more robust varieties. Wheat’s genome is so large and complex it was only recently mapped successfully, meaning our understanding of it has not been as robust as with other plants.  Wheat is a polyploid, meaning it can contain more than two chromosomes (diploid). Common wheat and spelt are hexaploid wheats, meaning they contain a full six sets of chromosomes – much larger than other crops’ genomes. Ancient wheats contain large amounts of genetic duplication, which was subsequently passed on to modern varieties, which made wheat’s genome even more diﬃcult to crack. Wheat is already a globally signiﬁcant crop with demand expected to rise signiﬁcantly in the coming decades. Our new understanding of wheat’s genome will help breeders identify valuable traits in both ancient varieties and modern varieties, resulting in more robust and diverse crops ready to face the challenges of a warming world and expanding population.

Wheat is by far the most common grain used in breads, pastas and other grain foods eaten in the United States, and increasingly the rest of the world. Therefore, most U.S. studies of “whole grains” in the aggregate attest to the beneﬁts of whole wheat in its common form. These beneﬁts are well established and include: risk of stroke reduced 30-36%, risk of type 2 diabetes reduced 21-30%, risk of heart disease reduced 25-28%, better weight maintenance, reduced risk of asthma, healthier blood pressure levels, and reduction of risk for inﬂammatory diseases. In addition, ancient wheats such as emmer and einkorn contain high antioxidant levels as well as carotenoids which promote eye health and other functions. 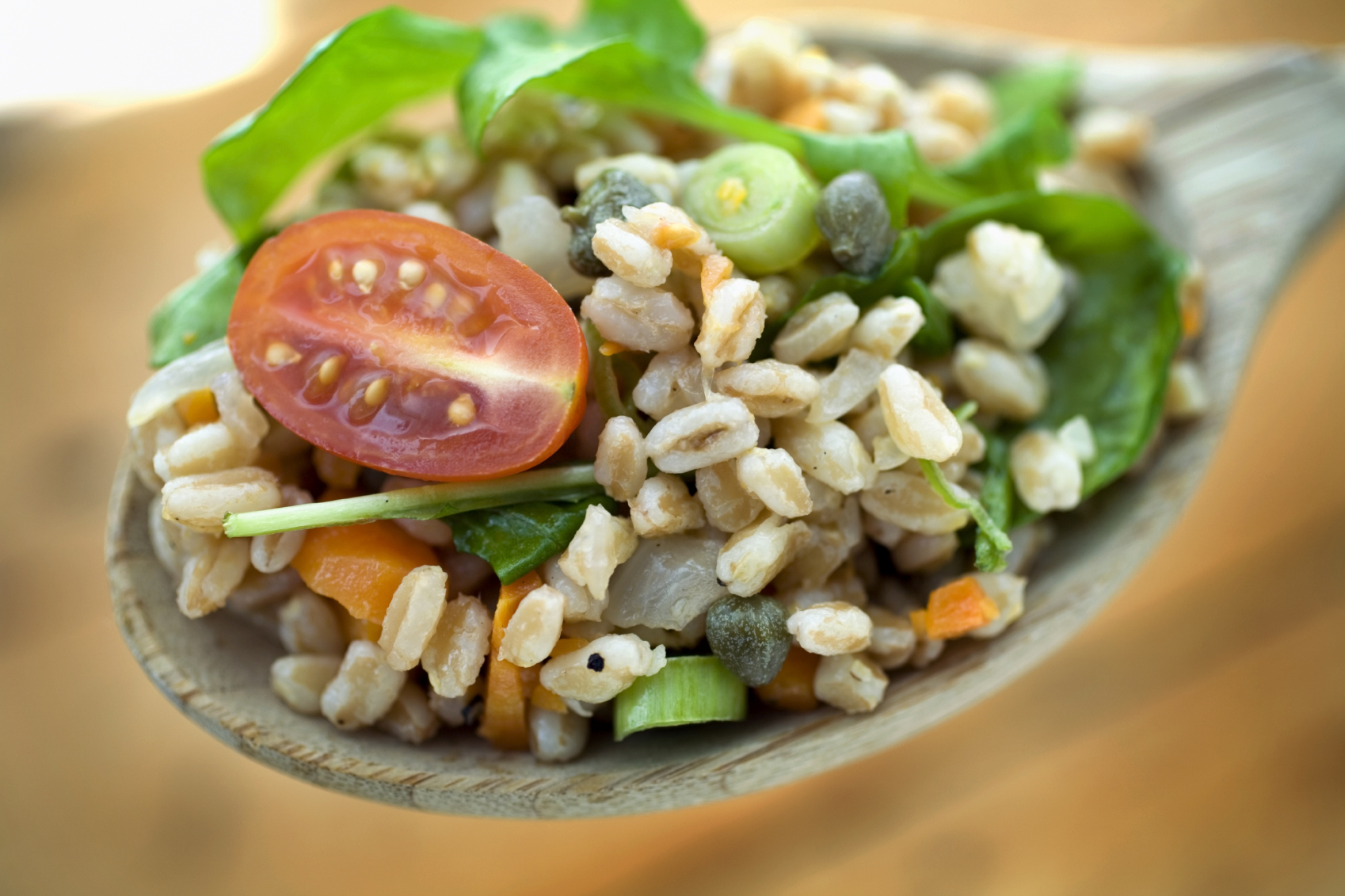 Diﬀerent intact wheats require diﬀerent ratios of water and varying cook times so we recommend following package instructions for best results. In general, cooking intact wheat varieties requires combining one cup of dried grain with 2.5-4 cups of liquid. Grains should be brought to a boil then allowed to simmer for 25 to 40 minutes. One cup of wheat yields about 3 cups of cooked grain. Note that soaking grains overnight may decrease cooking time.

Wheat is used in both warm and cold grain salads and is quite popular in sides and pilafs. Wheat is nutty and somewhat sweet, pairing well with nearly everything! One serving of cooked wheat (¼ cup, uncooked) has 160 calories, 5 grams of ﬁber and 7 grams of protein.

Try out these delicious wheat recipes below!

Farro with Pistachio and Herbs