In Praise of Sourdough

My gut instincts told me whole grain sourdough is about as good as bread comes. When I looked at the evidence, I was even more convinced.

Unless you’ve been living in a hole underground, you’re probably aware of all the attention being paid these days to the gut microbiome – the rich ecology of hard-working bacteria in our digestive tract. Although many of us grew up learning that “bacteria are the enemy,” it turns out that our human cells are outnumbered by helpful bacteria within us that play a big role in helping us digest our food and maintain good health. 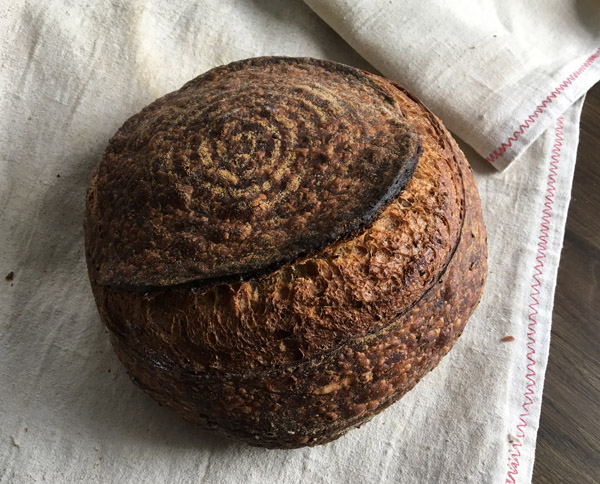 If you want to treat your resident bacteria well (and trust me, you do!), feed them whole grains. That’s the conclusion from a recent U.S. clinical trial of 81 adults that Kelly featured in her blog last week. Even better, perhaps: feed them sourdough whole grains, made more delicious by beneﬁcial bacteria from the slow-fermenting sourdough process.

Lately I’ve been enjoying an amazing sourdough whole wheat bread from my neighborhood bakery, made with locally-milled Maine Grains wheat. Intoxicated by the strong wheaty aroma that ﬁlls my kitchen when I bring home a fresh loaf, I got curious about whether sourdough bread like this had any special beneﬁts for me and/or my gut microbes. Was I jumping to conclusions, or did the research back up my gut [pun intended] instinct?

The evidence was solid. Noodling around in PubMed (a research geek’s equivalent of a candy store), I found some very cool studies showing the advantages of sourdough bread produced with slow fermentation compared to typical commercial yeast breads: 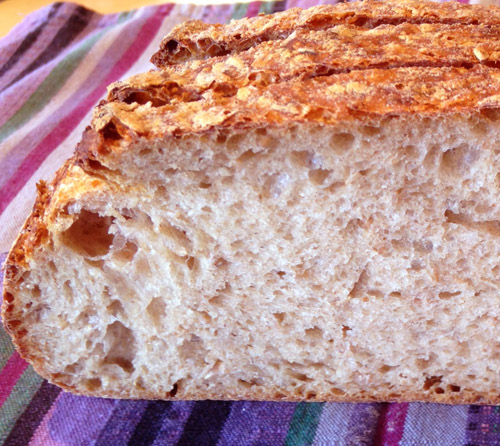 The lovely microbes that are responsible for all these beneﬁts of sourdough bread apparently don’t live to tell about it. Dr. Marco Gobbetti, an Italian researcher who is one of the world’s experts on sourdough fermentation, told us that the lactobacilli themselves don’t survive the baking process – even though their hard work makes for a better loaf.

While I’ve been nibbling my whole wheat sourdough bread, I’ve been reading two fascinating books explaining the gut microbiome: The Mind-Gut Connection by Emeran Mayer, MD and I Contain Multitudes by Ed Yong. I recommend both of these to anyone interested in this topic. (Cynthia)

Flora
Don't the bacteria die when the bread is baked?
Cynthia
Hi Flora. Good question. We had the impression the answer was yes. See toward the end of this article -- the sourdough bacteria play a key role in shelf life, which seemed to indicate that they are still present in the baked bread. http://onlinelibrary.wiley.com/doi/10.1111/j.1541-4337.2011.00148.x/full . However, we checked with Dr. Marco Gobbetti and he told us the bacteria don't survive the baking process. Interesting to know.
Alice
I think they sent off tiny spours that are protected in a cell befor they die ;then when the bread cools they hatch so to speak then you have the bacteria back. which is why the bread is slow to spoil and becomes more sour the older it gets.
Ab
I think the bacteria survive. I bake or make a three-day process sourdough bread and after baking if I leave it out I noticed it can become more sour.. I use only whole grain organic wheat. The bread just has starter and salt and water and wheat.