Rice of Many Colors

Brown rice is whole grain; white rice isn't. That's the truth – but it's not the whole truth. Prepare to be dazzled by black, purple and red rice too...

Brown rice is whole grain; white rice isn’t. That’s the truth – but it’s not the whole truth. Turns out that whole grain rice comes in colors other than brown – colors that will liven up the look of your plate and may also oﬀer additional health beneﬁts. Prepare to be dazzled.

Black rice came to be when a gene in Japanese rice went rogue, resulting in overproduction of anthocyanin, the same dark pigment that helps make other deep-colored foods like blueberries and red cabbage so healthy. Studies link consumption of foods rich in anthocyanins (a type of antioxidant) with reduced risk of cardiovascular disease and with anti-carcinogenic (anti-cancer) activities.

While we won’t say no to a little health boost, we like black rice best for the way it stays a deep purplish-black when it’s cooked. Hold oﬀ adding light-colored foods (like chicken) to a dish until the last minute, though, or you may even ﬁnd those other ingredients take on a purplish tinge! Makes plain old white rice look pretty ho-hum.

Legend has it that the name “Forbidden Rice” was bestowed on black rice because of its scarcity hundreds or even thousands of years ago; the meager supply was kept for the Emperor, and forbidden to others. That said, today black rice isn’t grown only in Asia: Italy’s Po Valley also has a tradition of black rice. We served a delicious Chinese Black Rice, Orange, and Avocado Salad from longtime Culinary Advisor Lorna Sass at one of our conferences, and it was a big hit.

There’s a lot of overlap between black rice and purple rice. Some sources maintain they’re just diﬀerent names for the same rice (It’s black! No, it’s purple!). Since scientists researching the health beneﬁts consider purple to have its own identity, we’re giving it a shoutout here. In a laboratory setting, in fact, researchers recently found that extracts of purple rice heightened the cancer-killing eﬀects of chemotherapthy drugs and may also be useful in preventing neurodegenerative diseases.

Leaving the lab and heading back to the kitchen, Thai cuisine features a purple sticky rice that has sweet overtones, making it a natural for a colorful rice pudding.  Award-winning cookbook author (and WGC Culinary Advisor) Maria Speck oﬀers a recipe for Purple Rice Pudding with Rose Water and Dates (which actually lists black rice as the main ingredient) or you could try this recipe for Coconut Milk Purple Sticky Rice Pudding. 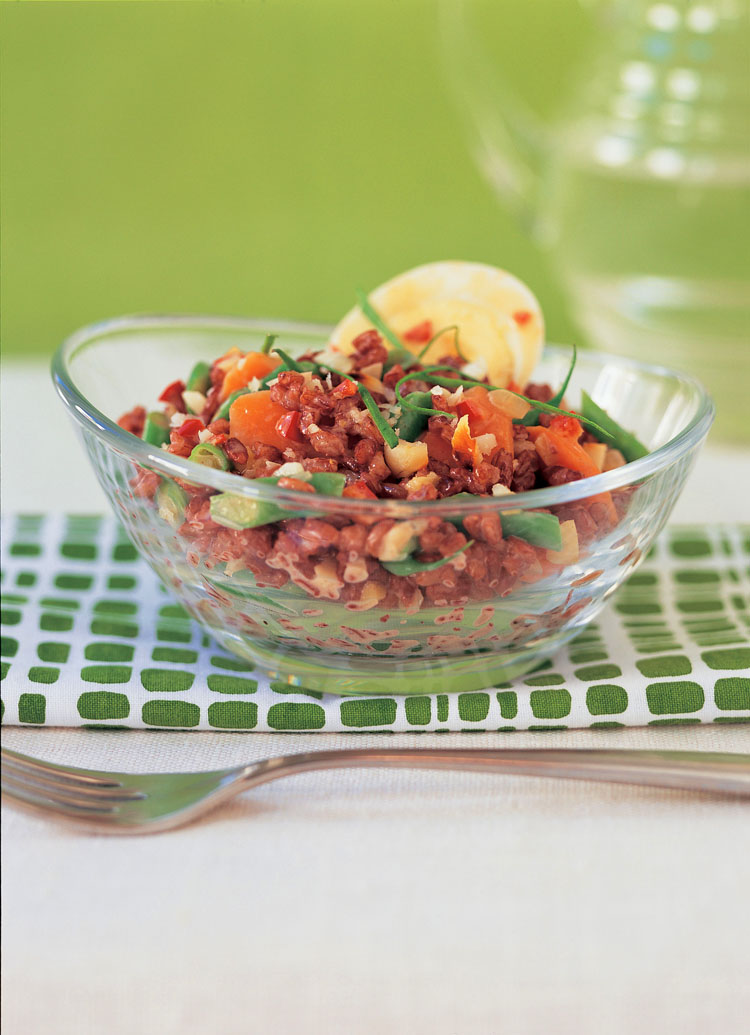 Anthocyanins also leave their mark on red rice, grown principally in Thailand (Thai red cargo rice), the Camargue region of southern France (Camargue red rice) and in Bhutan (Bhutanese red rice). It’s the staple food of the Kingdom of Bhutan in the Himalayas, where it’s prized for its nutty taste and fragrant aroma, similar to that of Basmati rice.  According to the International Rice Research Institute (IRRI), in nearby northern India the cooking water from red rice has traditionally been given to pregnant women and children to drink – a ritual that science backs up, now that we understand the high levels of anthocyanins – and minerals like zinc and iron – in red rice. Today red rice is also being grown in California’s Sacramento Valley, for those who like to support grains from more local sources.

Most red rice takes on a rich brick-red color that lightens a bit when it cooks. And speaking of cooking, red rice tends to cook in a little less time than brown rice (as little as 20 minutes), another plus. Try WGC Culinary Advisor Robin Asbell’s ﬂavorful Indonesian Red Rice Salad with Boiled Eggs and Macademias (pictured above) to get a good taste of red rice.

Rice is September’s Grain of the Month

Rice just happens to be September’s Grain of the Month, so step away from this blog right now, and go try some new dish featuring brown, black, purple or red rice. (Cynthia)