Millet and Teff – November Grains of the Month 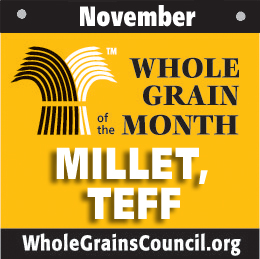 In November we’re celebrating two grains – Millet and Teﬀ, both of which have a long history in traditional diets.

Though millet may be a lesser-known ancient grain, it is considered one of the world’s oldest cultivated crops. Millet has been found at archeological sites over 7500 years old in Asia and Africa, and Chinese archeologists have uncovered a perfectly preserved 4000-year-old bowl of noodles made of foxtail millet. Written word has recorded the prevalence of millets in the ancient world, from Ancient Greek and Ancient Roman texts, and into Medieval Europe. It is even mentioned in the Old Testament.

Though at one point widespread, millets have been displaced in many regions by cereal crops with higher yields such as rice, corn and wheat. Today, 97% of millets are produced in developing countries and they remain a staple crop for human consumption in some semiarid regions of Asia and Africa such as India, Nigeria and the Niger. True to its hardy nature, millets are making a comeback both in the United States and abroad as the ancient grain trend continues to grow and demand for gluten free options increases. Click here to see more millet photos. 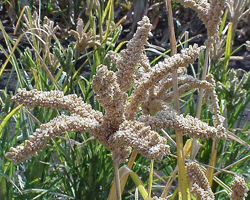 The term ‘millet’ does not refer to a single type of grain, rather to a group of small-seeded, annual grasses. Millets are impressive, hardy, cereal crops that are low-maintenance and drought-resistant, thriving in semiarid environments. Millets also grow at an unprecedented rate, maturing in as little as 60 days – almost half the time it takes for rice or wheat. These characteristics made it the ideal crop for ancient nomadic groups, contributing to the crop’s rapid spread across Asia and into Europe. It is also believed that millet’s low maintenance and quick maturation time played an encouraging role in these nomadic tribes’ gradual transition into a more agrarian lifestyle.

Around 2500 years ago, the archaeological record shows the spread of diﬀerent cereal crops through trade routes across Asia and Africa. Millets start showing up in the fertile crescent, while barley and wheat start appearing in Northern China. This knowledge sharing helped create diverse, polycrop agricultural communities. Overtime, however, rice, wheat and barley became the staple crops in the majority of these regions. Though lacking in millets’ hardiness and short maturation time, they have much larger seeds and produce higher yields which resulted in their continued development. Today, rice and wheat, along with corn, provide almost 60% of the plant calories humans consume. 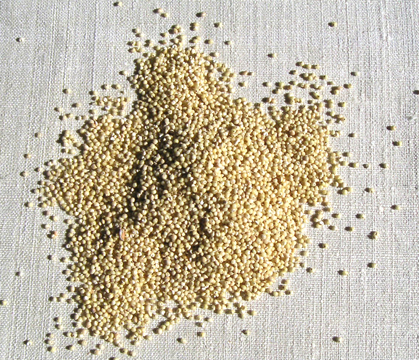 Traditional foods across the globe reﬂect millets historic importance: roti and chapati ﬂatbreads in India, uji (a type of porridge), injera (a fermented ﬂatbread commonly eaten in Ethiopia) and beer in Africa, and kasha and fermented drinks in Eastern Europe. Although millet no longer plays the predominant role it once did across Europe and parts of Asia, it is still the 6th most important cereal grain in the world. India, China and Nigeria are the largest producers of millets, and the Research Institute for the Semi-Arid Tropics estimates that in Africa and Asia more than 90 million people depend on millets in their diets. There are hundreds of millet types, but the major types grown commercially are: proso millet, foxtail millet, pearl millet, Japanese barnyard millet and browntop millet. In the United States, millet is often simply labeled as “millet,” without specifying the exact type. However, in the US and Europe, proso millet (Panicum miliaceum) is the major millet consumed.

In the West ( and increasingly in the East) millet is grown primarily as animal fodder or bird seed. Due to its short growing time, many agricultural resources recommend millet as emergency fodder supplement. More than half the millet grown in the United States is grown in Colorado, with the remainder grown across Wyoming, Montana and the Dakotas. Thanks to the growing popularity of ancient grains and millet’s lower price point, production of millet increased in the United States by 16% in 2017.

Teﬀ is just one of the many types of millet. It is commonly grouped as a ‘small millet’ along with fonio, ﬁnger millet and proso millet. Scientiﬁcally, however, it only belongs to the same subfamily and tribe (Eragrostideae) as ﬁnger millet. The name teﬀ is thought to come from the word “lost” in Amharic because of its tiny size – a teﬀ seed is less than 1mm diameter, the size of a poppy seed. Check out some teﬀ photos here! 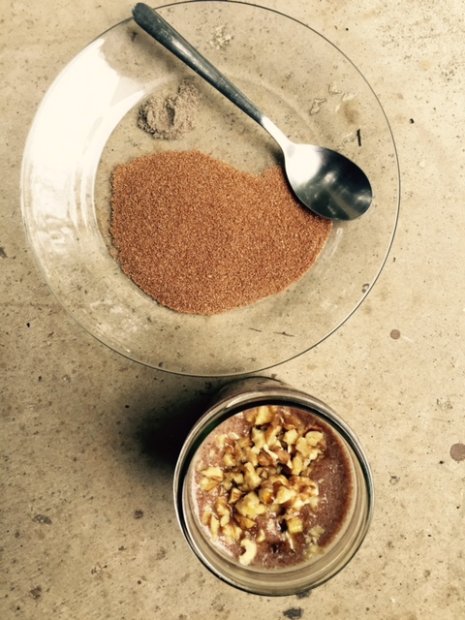 Teﬀ has been grown for centuries in the horn of Africa. Much like the role other types of millet played in Asia, its tiny size, resilience and short growing season made it an ideal crop for the nomadic lifestyle in Ethiopia and Eritrea where it has long thrived. A handful of teﬀ is enough to sow a ﬁeld, it cooks quickly, and uses less fuel than other foods. Teﬀ is unique in that it thrives both during droughts and in waterlogged soil, making it a dependable staple wherever it’s grown. Teﬀ is used for making diﬀerent kinds of injera, a fermented ﬂatbread eaten with most meals in Ethiopia. Teﬀ is a staple in the Ethiopian diet and accounts for about two-third of the daily protein intake.

In 2006, Ethiopian government put a ban on the export of raw teﬀ fearing the ancient grain craze – embodied by quinoa’s popularity in the ﬁrst decade of the 2000 – would lead to a spike in teﬀ prices. Teﬀ production in Ethiopia, however, continued to thrive allaying fears of a price spike, resulting in a partial lift of the ban in 2015.

The growing interest in global cuisines (both during and after the ban) also helped result in the cultivation of teﬀ in the United States for the domestic market. In the US today, teﬀ is primarily grown in Idaho, Oregon, and Washington State.

Click here to see photos of diﬀerent kinds of millets.

It is important to keep in mind there is no “healthiest” whole grain. All grains, when kept whole, have unique qualities that make them an integral part of a healthy diet. Recent studies have found that millets show high antioxidant activity and may help control blood sugar and cholesterol. On the other hand, teﬀ leads all the grains – by a wide margin – in its calcium content, with a cup of cooked teﬀ oﬀering 123 mg, about the same amount of calcium as in a half-cup of cooked spinach or yogurt.

Each whole grain oﬀers a diﬀerent mix of nutrients, as does each type of millet. As a whole, millets provide a good source (greater than or equal to 10% of the recommended daily value) of protein, ﬁber, magnesium, copper and phosphorus and is an excellent source (20% or more of recommended daily value) of manganese, a trace mineral that when combined with other essential vitamins can promote bone and brain health, and helps regulate inﬂammation. Teﬀ contains these nutrients as well, but packs an even greater nutritional punch with higher levels of copper and provides 100% of the recommended daily value of manganese. If you have celiac disease remember, millet and teﬀ are just one of the many great gluten free grain options!

Click here to learn more about recent studies highlighting the health of millet.

Millets, including teﬀ, are cooked with varying amount of liquid to achieve diﬀerent textures – from ﬂuﬀy and light, to mashable and creamy. Start with 2.5 cups of liquid to 1 cup of grain. Bring the grains and liquid to boil, then simmer for 20-30 minutes. For a creamier texture, start with more water. Millets are warm and buttery, pairing well with mushrooms, herbs, warm spices, scallions and squash. One 45g serving of cooked whole grain millet has 190 calories, 4 grams of ﬁber and 6 grams of protein,

Teﬀ has a slightly sweet taste with undertones of cocoa and hazelnut, pairing well with nuts, chocolate, seeds, pumpkin and dark fruit. Unlike rice or quinoa, which plump into individual kernels, the tiny teﬀ grains cling together, making it well suited for warm polenta and porridge inspired dishes. One 45g serving of teﬀ contains 180 calories, 4 grams of ﬁber and 6 grams of protein.

Try out these wonderful whole grain millet and teﬀ recipes below! 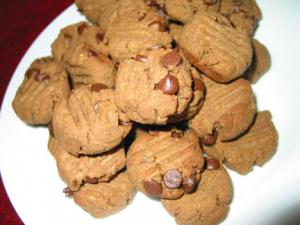 Millet with Zucchini and Chickpeas

Banana Bread with Teﬀ and Chocolate

If you’d like to know more about teﬀ and the various millets, we highly recommend the book “Lost Crops of Africa.”